You are here: Home / Entertainment / Cancer can be such a drag 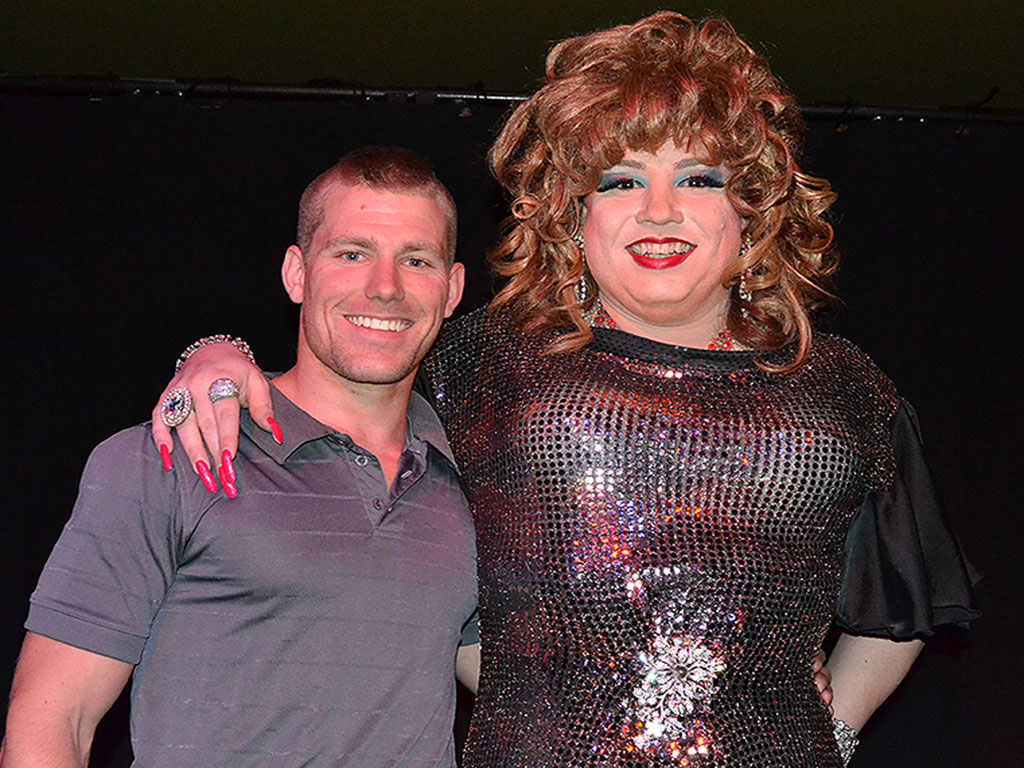 Drag shows are generally known for their glitz and glam, but for the acts and audience alike, generosity was the theme of the evening on March 7. Local drag royalty took the stage at The Observatory and raised $445 for Ride to Conquer Cancer, a cause with campus connections both on and off the stage.

Host Krystal Caring came on in the first of her many elaborate outfits to open the show, and invited on stage the Algonquin student who inspired the bi-annual drag show’s philanthropic twist: Mike Pineault.

The health and wellness student has travelled hundreds of kilometers and raised hundreds of thousands of dollars over the last few years through his involvement with Ride to Conquer Cancer. He met Caring at dirty bingo and they got to chatting, bonding over their chartable efforts.

“Mike has come to the shows for the last year and a half and he approached me that he was doing this ride and asked would I be willing to even just donate,” said Caring. True to her name, instead of just contributing, Caring said she would put on a whole show for Pineault’s ride and try to donate all of the money.

“We’re really good friends so we just collaborated one of her shows with one of my events and it just happened to work out really well. We were lucky the SA and QSA gave us full proceeds,” said Pineault.

In addition to the proceeds from ticket sales going to Pineault’s ride, Caring encouraged the audience to toss their change into a hat that circulated through the crowd, with the promise that Pineault and his co-organizer and classmate Spencer Ayres would take their shirts off if they reached their impromptu fundraising goal before intermission.

As the hat was being passed around the audience, Caring welcomed to the stage homegrown talent Selina Hoe-Mez. The Algonquin business administration student was thrilled to be part of the show, after getting her start at a college campus drag show three years ago.

Following intermission Pineault was brought back up on stage to announce they had doubled their goal by the time Hoe-Mez completed her first song.

“I’m so grateful for everyone’s help—$155.25 in a matter of five minutes—it was lightning fast, it was crazy, doubled my expectations for sure. People don’t know me but they donate money because everybody’s been touched by cancer in some way shape or form so everyone has their story and that’s why people give,” said Pineault.

Caring said that the generosity demonstrated that night is the kind of thing that keeps her so connected to the college and she thanked Pineault for involving her in this cause.

“I really enjoy it here… it has a really positive feeling and vibe to the whole school and the students are really friendly,” said Caring.

Students waiting in line pre-show all agreed that having a drag event like this on campus showcases local diversity, it’s entertaining, and it’s a convenient way to bring friends together.

“The drag show is one of the bigger events the QSA can organize that appeals to more than just QSA members,” said Queer Students Alliance organizer John Petti. This sentiment was put to the test during the show when Caring asked for applause for every orientation in attendance and every spectrum on the rainbow was fairly equally represented.

“I think it’s a good way of introducing people to something they may not have seen before and it’s an added benefit that it’s for charity,” said attendee and office administration student Louis Potvin.

This was the first time the entire proceeds from the bi-annual drag show were being donated.

“We were going to have a drag show anyway, but Krystal was the one the proposed it be a charity event. We tried to make it a big event because all the proceeds were going to charity,” said Petti.

The proceeds from the drag show brought Pineault’s Ride to Conquer Cancer team’s fundraising total to just over 100 thousand dollars and they still have a couple of months to reach their goal of a quarter of a million dollars, before the June ride.

By: Rachel Aiello Drag shows are generally known for their glitz and glam, but for the acts and audience alike, generosity was the theme of the evening on March 7. Local drag royalty took the stage at The Observatory and raised $445 for Ride to Conquer Cancer, a cause with campus connections both on and […]

By: Rachel Aiello Drag shows are generally known for their glitz and glam, but for the acts and audience alike, generosity was the theme of the evening on March 7. Local drag royalty took the stage at The Observatory and raised $445 for Ride to Conquer Cancer, a cause with campus connections both on and […]