You are here: Home / Entertainment / Algonquin alumna returns to share her culinary experiences 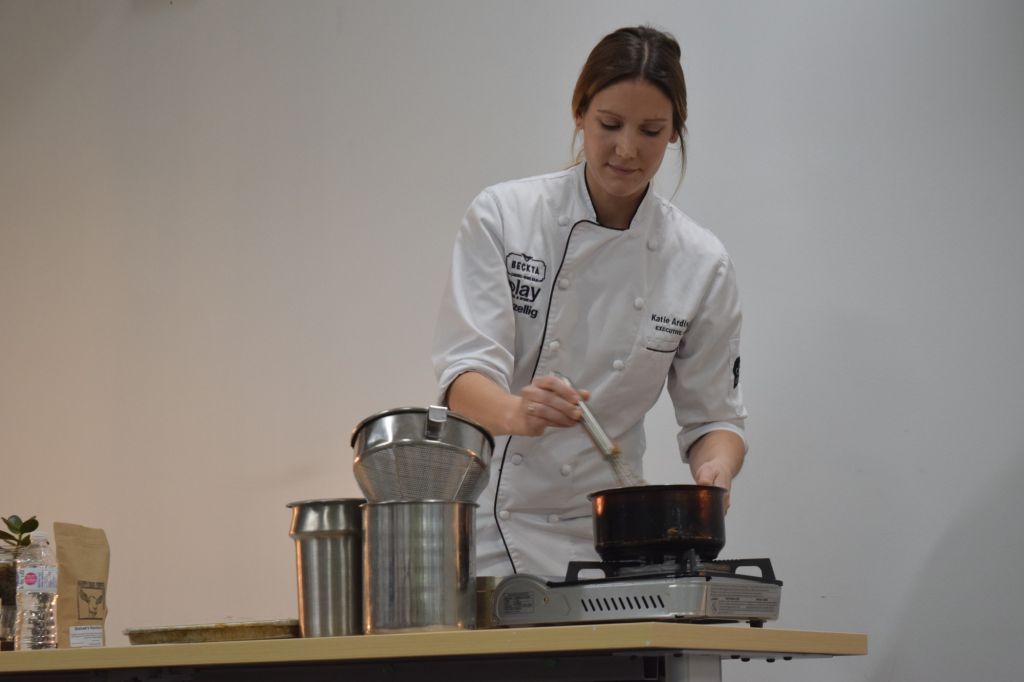 Algonquin alumna and chef, Katie Ardington, demonstrates to students how to make brown butter in C-building on Nov. 28.

Award-winning chef and Algonquin alumna, Katie Ardington, brought a mix of culinary knowledge and life advice to 34 students at her masterclass in C-building on Nov. 28.

Ardington, who graduated from the culinary management program in 2007, is now the executive chef at Beckta Restaurant Group, where she oversees Play Food and Wine, Beckta Dining and Wine and Gezelling.

But it hasn’t been easy to get to this point.

Her first job in a restaurant was as a dishwasher at the age of 13. After some time in that role, she was allowed to do smaller culinary tasks, such as preparing salads and cutting cheese. In high school she moved to the front of the house as a waitress.

When it came time to start thinking about post-secondary school, becoming a chef wasn’t something she considered. As she had a passion for taking care of others, she submitted her application for nursing school.

“I was about to pay my tuition and I had one of those life-changing moments,” she said during her presentation. “I questioned whether this was something I wanted to do with the rest of my life.”

With the guidance of her father, Ardington decided to leave the idea of nursing school behind and enrolled at Algonquin, demonstrating to students that life can go a different route than intended.

While studying at the college, she began working at an Italian bistro in the city. She quickly noticed that the restaurant was outsourcing its desserts from a grocery store and wanted to change that.

“I asked the executive chef if I could try and come up with an original dessert and he told me to go for it,” she said. “It went really well and he was able to see the difference between something made in-house and something made at a store.”

After this, she slowly started to develop the dessert menu there and was able to incorporate her personal touch.

A couple of years following her graduation from the college, she was looking for the best restaurant in Ottawa and found herself at Beckta Food and Wine.

After working several years within the restaurant group, she applied and accepted the role as head chef for Prime Minister Justin Trudeau and his family and stayed there for two years before returning to Beckta.

According to Melissa Marchand, events officer for the AC Hub, it is stories and events like these that can help students to see what their lives can be like after they leave Algonquin.

“We have partnered with the alumni and friends department to bring back people that have studied at the college and are now working in their preferred industry,” she said. “We want alumni to make a connection with current students, so they can give them insight and give them skills that they can bring back home or into the classroom.”

Because of the success of this event, Marchand said the AC Hub will be expanding on this initiative.

Ardington is the only chef who has been asked to come back and present so far and while a number of students in the room were from the culinary program, her advice resonated with those who weren’t.

The responsibilities of professional life can often get in the way of the quality of a personal life and Ardington knows that all too well.

“This industry is very seductive and it’s very easy to want to do a 15-hour shift and overwork yourself,” she said. “You need to both remind the people in your life why you’re doing what you love and also make time for them, so they don’t resent you for it later on.”

Sara Cherid, an autism and behaviour student, wanted to attend the masterclass because of her recent interest in Netflix cooking shows. What she didn’t expect was to get practical tips that she can incorporate into her day-to-day life.

“Listening to her speak about her successes from age 13 to now was really inspiring and shows that hard work and dedication can pay off,” she said. “But it was also helpful to hear from someone like that — that you can and should make time for yourself and the people you love or else you won’t be truly happy.”

“Never be afraid to keep learning and expanding and never think you know everything because you don’t,” she said. “Once you are comfortable in an environment, you should get away from it because comfort doesn’t help anyone.”

As for Ardington, she continues to learn every day. Once she has accumulated enough skills, she can see herself leaving the restaurant scene.

“I love coming back to this school and maybe years from now, I will come back here and teach,” she said. “But I still have a lot to learn before I can share my knowledge.”

Award-winning chef and Algonquin alumna, Katie Ardington, brought a mix of culinary knowledge and life advice to 34 students at her masterclass in C-building on Nov. 28. Ardington, who graduated from the culinary management program in 2007, is now the executive chef at Beckta Restaurant Group, where she oversees Play Food and Wine, Beckta Dining […]

Award-winning chef and Algonquin alumna, Katie Ardington, brought a mix of culinary knowledge and life advice to 34 students at her masterclass in C-building on Nov. 28. Ardington, who graduated from the culinary management program in 2007, is now the executive chef at Beckta Restaurant Group, where she oversees Play Food and Wine, Beckta Dining […]