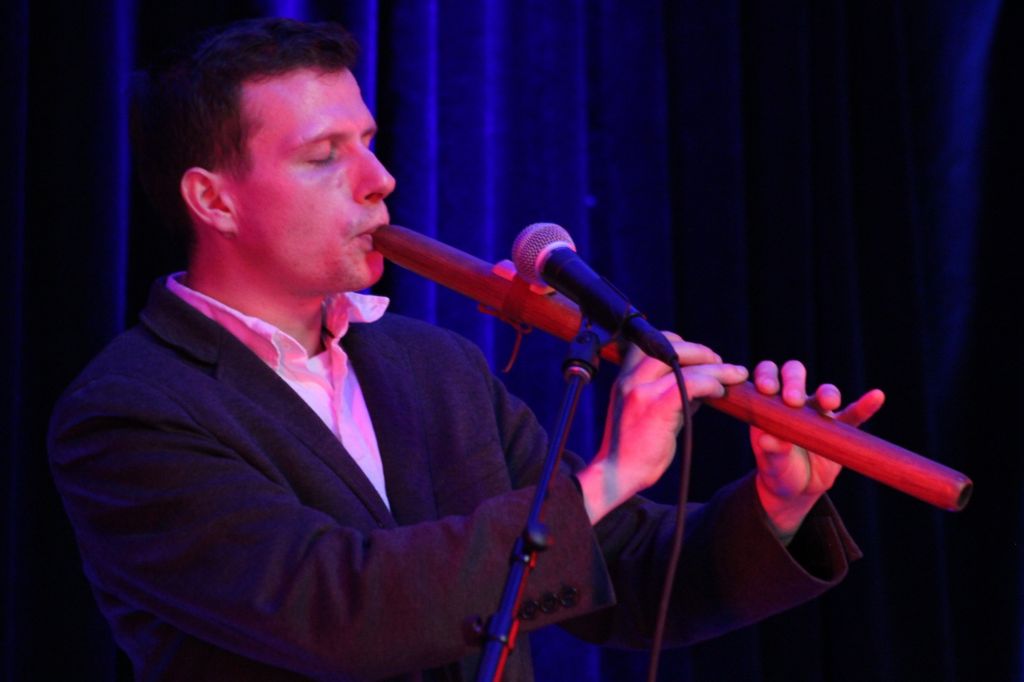 Andrew Johnson plays the flute during his performance at the AC Vibes soul showcase on Nov. 26.

E-building’s corner lounge was transformed into an intimate jazz lounge on Nov. 26 for the first ever AC Vibes soul showcase.

Pacheco had written her set’s opening song 15 minutes before the show, she admitted to the crowd later.

“It is something I do very often,” said Pacheco. “My last show, I wrote a song the night before. I decided to perform it because I was feeling all these emotions towards this one girl who was in the crowd and I wanted her to know how I felt.”

Allard shared her unique music-comedy style, encouraging the audience sway to her soft-spoken music before having them burst into laughter. She is a Yuk Yuk’s frequent.

“If I can be silly and get [students] to see it’s not so scary, that was my role in the event tonight,” said Allard.

Johnson, the last to perform, opened with acoustic guitar and then turned to a unique live-loop set with electric guitar, beat-boxing and unexpectedly, a flute.

“This is the first time I’ll have played electric guitar since I was 12,” said Johnson before the show.

Johnson’s specialty is live-looping, he creates beats on the spot, recording and playing back a piece of music in real time.

“Our intention is to bring the music industry in Ottawa up to the surface and let people know it exists,” said Johnson, “and to see what’s possible. “

AC Music Networking group is a campus club that connects young talent with the purpose of helping one another actualize their potential. The club aims to inspire students at Algonquin and around the city to build a supportive network of artists and entrepreneurs.

“I am really proud of my students who are running the club,” said Allard. “It encourages students to get out there and to get on stage.”

The show was first of many showcase events to be held on campus. The club plans to host a showcase at least once a semester.