You are here: Home / Entertainment / A class presentation that ended up as a mental health organization 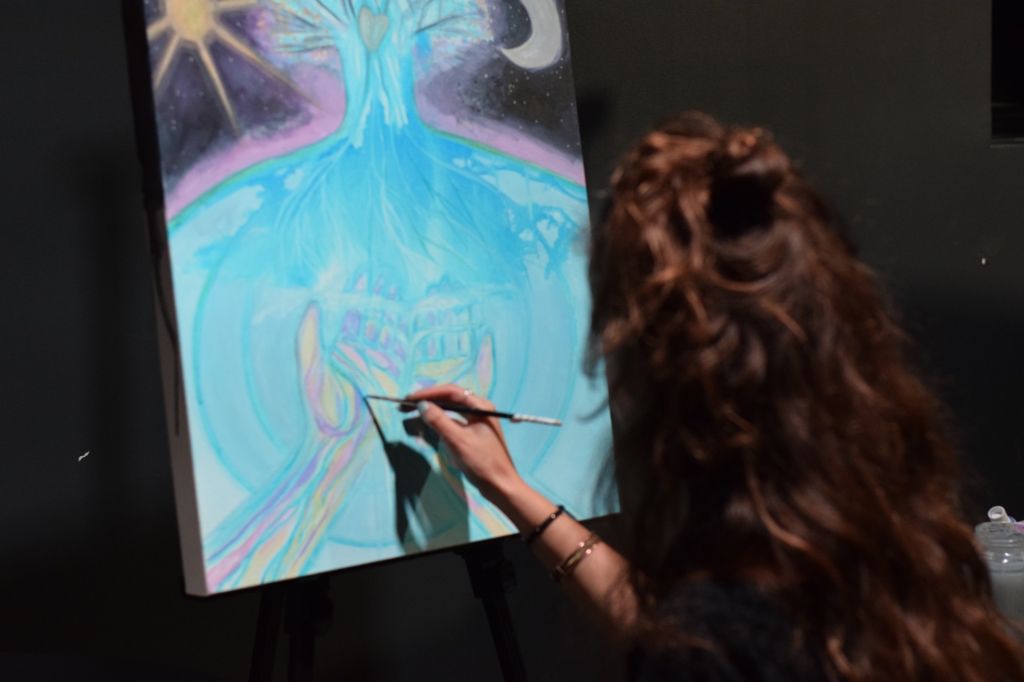 Marie-Hélène Lavoie painting her piece as a donation for the Art show. The piece is part of the live auction that was placed at the end of the art show Photo credit: Baraa Jaafar

An art show that features paintings from people who struggle with mental illness has been happening every year on Nov. 28 since 2017.

It is part of a larger four-year-old organization called the Art of Mental Health, which has donated around $8,000 to different organizations including CHEO.

The founder, Randy Joe Sidawi, 30, formerly an advertising and marketing student at Algonquin College, presented his idea for the Art of Mental Health, during his own depression as a project for his presentation skills class.

Today, Art of Mental Health does workshops in different places in Ottawa such as universities, community centers and Immigration Canada.

But at the beginning, Sidawi created a Facebook page under the name of Paint Therapy Ottawa and photoshopped people painting at the Parliament Hill as part of his presentation. His then not-yet-real event’s idea was to hold a workshop for people with mental illness to paint their depression in different colours.

After his class presentation, he started getting notifications from the page. “A week later 500 people liked the page, two weeks later it became 3000 people and organizations started sharing it,” Sidawi said.

Sidawi had two options, shout down the page like nothing happened or plan the event and make it happen. He decided to make it happen and started planning for the event.

Getting sponsors was one of the first steps. Although he was fighting depression himself at the time. Sidawi created something big out of nothing in just a weeks. Some help was needed and By coincidence, he met Claudia Salguero, at expert in community events, at a presentation she gave the YMCA.

Salguero, 54, a community artist and self-employed person, donated some of her time and knowledge to help Sidawi. Salguero graduated graphic design from the University of Bogota Jorge Tadeo Lozano in Colombia. She’s a painter, photographer and musician.

“I haven’t been through depression, maybe because I am an artist so I have a forever therapist,” Salguero said. “When I paint I am not alone, I am with myself and that’s what most people don’t know about.”

After getting all the material, sponsors, and permissions needed to make the event happen, on July 19, 2016 the first event took place on Parliament Hill.

“I was looking at the Parliament, with hundreds of people painting, I teared,” said Sidawi. “This was all worth it.” It helped him feel that he matters, he can make a difference and help people when a lot of people in depression think they can’t.

At the end of that first day, Sidawi had $1,000 in donations and all of his expenses were covered.

Sidawi stopped studying at Algonquin College after that because of his depression and came back during the second semester of 2018.

With the first Parliament Hill event behind him, Sidawi didn’t want to stay at the same level with the organization. He wanted new challenges. “It shouldn’t get easier,” Sidawi said. “If it gets easier, that means we’re not improving.”

The art show was the next step. This time he got some help from Jessica Khalil, 26, a graduate from the University of Ottawa in undergrad bachelors in health sciences.

Khalil met Sidawi through a mutual friend and he offered her the art show organizer position. “Randy found a way to combine art and mental health together and bringing joy and happiness and bringing people together, that’s what I’m all about,” Khalil said. So I wanted to be a part of it, I wanted to help. I knew that I had special skills and knowledge that I could contribute to the team.”

Although she was never diagnosed by a doctor, Khalil never sought help for her depression because of the stigma. “I’m Lebanese so where I come from, people will say ‘man up’ or ‘just deal with it,'” she said.

Now she’s strong and healthy even though what she had been through will always be a part of her. After passing through her own depression, Khalil can relate more to people with mental illness. Being part of Art for Mental Health organization made her feel empowered and inspired.

“I saw that people care and people are happy and people are sharing moments together and sharing smiles together,” she said. “Just looking around and seeing that everyone is coming out for one cause, which is raising awareness for mental health is so important and so heartwarming.”

Emily Chase, 29, is the communication and community engagement person at the Art For Mental Health.

Chase is from New Brunswick where she studies fashion design at the New Brunswick College of Craft and Design. She is a painter who just started her Instagram page to sell her art. She has also suffered from anxiety her entire life then depression after she gave birth to her first daughter. “Painting is what makes my anxiety go quite, shut it off for a while,” Chase said.

Chase is donating two pieces of her art to his year’s November art show.

For Sidawi, this is the next step in getting all of his life together. He has decided to walk through the same door that he used to stand behind and cry then go back home because of his depression.

When he enrolled in the second semester of the same program at Algonquin College, he said: “it felt right.”

A class presentation that ended up as a mental health organization Reviewed by Baraa Jaafar on January 30, 2020 .

An art show that features paintings from people who struggle with mental illness has been happening every year on Nov. 28 since 2017. It is part of a larger four-year-old organization called the Art of Mental Health, which has donated around $8,000 to different organizations including CHEO. The founder, Randy Joe Sidawi, 30, formerly an […]

An art show that features paintings from people who struggle with mental illness has been happening every year on Nov. 28 since 2017. It is part of a larger four-year-old organization called the Art of Mental Health, which has donated around $8,000 to different organizations including CHEO. The founder, Randy Joe Sidawi, 30, formerly an […]