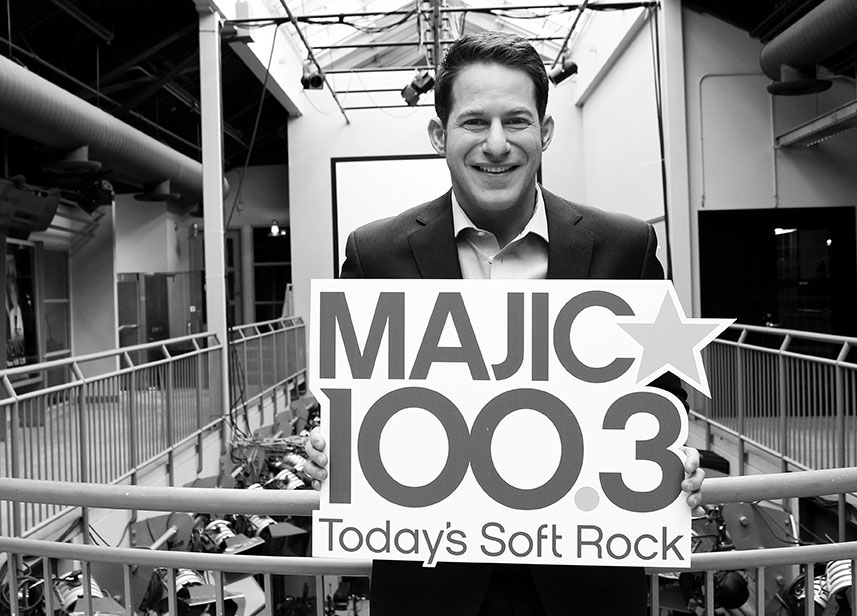 In more ways than one, Schwartz has arrived.

“Working the Olympics is the top of the game for some people in this business,” says Schwartz. “It’s like nothing I’ve ever experienced before.”

Schwartz was an announcer at the 2010 Olympic Games in Vancouver as well.

A graduate of the radio broadcasting program in 1997, Schwartz is flattered to have been chosen as an Olympic announcer for the second time. He calls his time spent at the college his greatest schooling experience, despite the fact that completing his degree took longer than expected.

After a rocky first year, riddled with bad grades and an attitude problem, Schwartz was kicked out of the program by the co-ordinator.

Schwartz feels a deep connection to the school, for and in spite of this.

“Algonquin, as a school, gives you an opportunity to not only get a great education, but also to learn about yourself,” says Schwartz.

Schwartz begged the college to take him back the next fall and they agreed on the condition that he not skip a single class or his reacceptance would be revoked.

He started again the next year, ultimately taking him three years to complete the two-year program.

“I took the extended plan,” he jokes.

Iain Barrie, a former professor in the radio broadcasting program, argues that this break did nothing but good for the future broadcaster.

“He came back with a new purpose, a new dedication and a new direction,” says Barrie. “He worked harder than ever before and just became an absolutely stellar student.”

It was during Schwartz’s second run at first-year that he started working at the Bear, a local rock radio station, as a volunteer on the morning show.

Barrie was very impressed by his ability to balance work and school.

“He worked hard on his skill development. He had a vision and he went out there and did it,” says Barrie. “And he did it exceptionally well.”

At the time, the radio personality’s shtick was pulling off silly acts such as wearing a bunny suit. This was what led to the nickname Stuntman Stu.

“When somebody recommended it, I said ‘That is the dumbest thing I’ve ever heard,’” Schwartz says with a laugh. “And now 17 years later, I have to explain to people why I call myself Stuntman. It just stuck.”

After spending nearly 11 years at the Bear, Schwartz decided it was time for a change and moved to sports radio at the Team 1200 in 2006.

It was at this time that Schwartz also snagged the role of announcer for the Ottawa Senators. In his first year, the team made their way to the Stanley Cup Finals.

“He really brought a whole new level of excitement and involvement to the rink,” says Barrie.

Schwartz spent another three years at the Team 1200 before leaving once again to work at BOB FM.

Schwartz finished up a year-and-a-half at BOB, hosting Stuntman and the Shark, before making a final leave to his current home away from home, Majic 100, in 2011.

“Majic is the perfect fit for my lifestyle,” Schwartz says.

“Stu has been working in broadcast forever,” says Owens. “Not a day goes by that I don’t learn something from him.”

On top of announcing and radio, Schwartz throws emceeing of events such as golf tournaments and the Sens Foundation Gala into the mix.

However, the most notable part of Schwartz’s career is the anti-bullying campaign he began in 2011, called No More Bullies.

The campaign began after a touching news story about the effects of school yard bullying found its way into the Majic Morning Show topics for the day.

Schwartz was especially moved by the story because he had been bullied throughout high school.

Still fired up about the issue after wrapping for the day, Schwartz took to social media.

He tweeted, “I’m so fed up with this, if I have to go out to every school in Ottawa and preach No More Bullies I will. #nomorebullies.”

From there, the campaign was born.

Schwartz, Poirier and Owens delivered on his promise, spending the last two-and-a-half years dedicating every Tuesday morning to spending time at a local high school, advocating to stop bullying dead in its tracks.

“He does so much for the community and all out of his own time,” says Owens. “He’s an amazing guy.”

The campaign has been backed by people all over, from the Ottawa Senators to the Cake Boss. All No More Bullies supporters wear bright blue rubber bracelets, marked with the brand.

“He’s a very fortunate and talented man,” says Barrie. “Certain things have to collide to get you on that path.”

Schwartz recognizes his roots at the college as the key to his success.

“I use the skills I learned at Algonquin every day,” he says. “I totally owe and give credit to the school.”

Brenda Rothwell, executive director of the AC Foundation, acknowledges Schwartz as an active alumnus. Schwartz has been volunteering with the school since graduation, most notably as the Master of Ceremony at the college’s 40th anniversary gala.

This led Schwartz to be chosen as Alumnus of the Year in 2003.

“Stu is one of our strongest cheerleaders,” says Rothwell. “He’s out and about in the community and he’s very proud of his roots.”

That very cheerleading, as well as his countless achievements and ongoing dedication to his profession and community, led the school to award Schwartz with a honourary degree in 2012.

Despite Schwartz’s long list of achievements and accolades, the fame has not gone to his head.

“In the end, we’re just people who talk on the radio,” he says. “I try to be the same person you hear on the radio as you see walking into Shoppers Drug Mart. I’m really just a regular guy.”

Schwartz’s career has seen much success so far, due to no shortage of hard work.

“My motto in life is simple and you’ve probably heard it before, but it’s worth repeating,” Schwartz said in his convocation speech in 2012. “Chase your dreams, no matter how big or small. Take chances. Follow your gut. Do what scares you and challenge it head on.

“As an Algonquin graduate, you’re now in the club.”