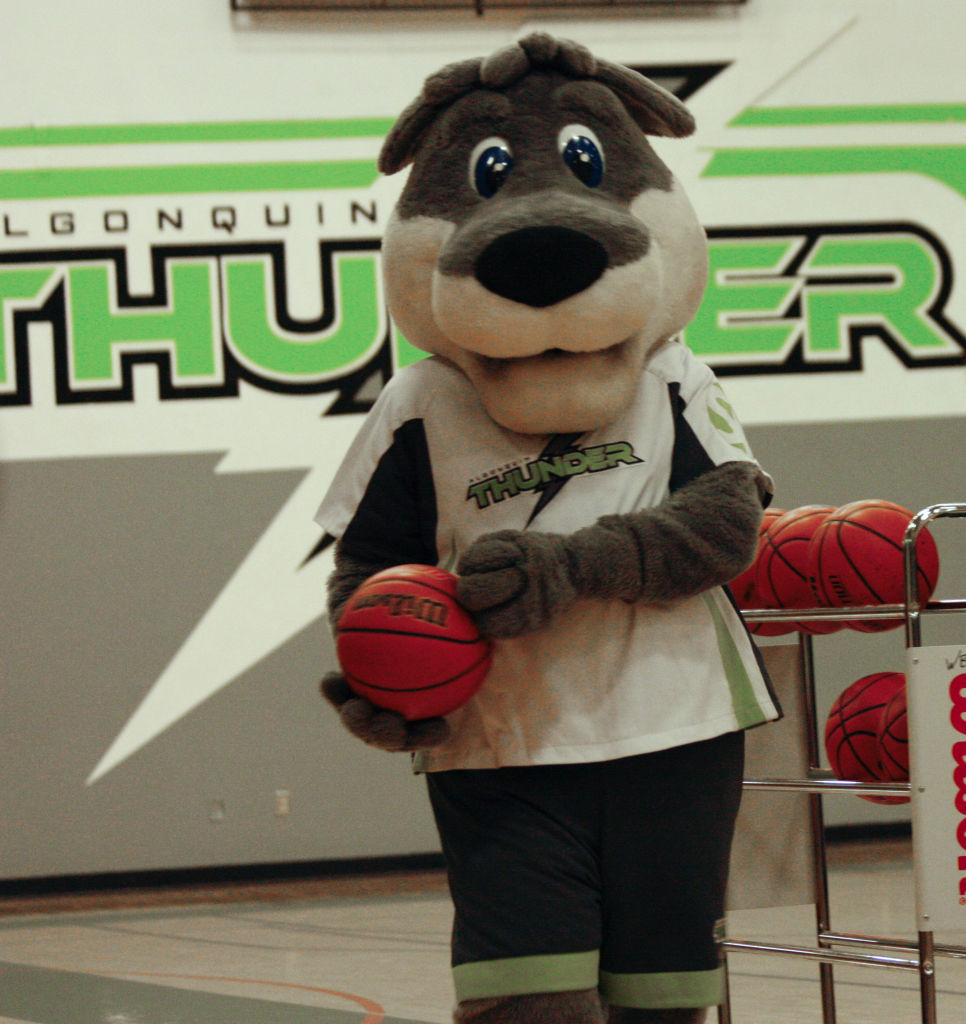 Thor shoots some baskets during halftime at a women’s basketball home game in the school gymnasium on Feb. 13. The Thor you see at Thunder games isn’t the same one that you would see with the SA.

If you’ve ever attended an Algonquin Thunder athletics game, or passed by the SA street team in the hall, then you’ve probably seen the guy in the giant wolf costume, otherwise known as Thor.  But did you ever wonder who was inside the costume?

Well for starters, the Thor you’ve danced with at a game and the one you’ve seen in the hallway or at an SA event are actually two different people. You might say that Thor has a split personality.

The man wearing the costume while pumping up the crowd during home games is a first-year library and information technician student while the one you see working with the SA is a female second-year student in the massage therapy program.  And while the job requires that their names remain anonymous, both started the job in the fall of 2015 and came about landing it in different ways.

The SA Thor is a veteran performer and had wanted the job for a couple of years but only applied for it through the SA website last summer.

“I grew up as a competitive dancer all my life so I like performing and entertaining people and I kind of always had that kind of role,” she said.  “I worked with kids a lot so I kind of put on that act of just having fun and stuff so I thought it would be a great opportunity just to use my skills.”

As Thor, she spends a couple of days a week performing with the SA street team dancing around and taking pictures while promoting events.

The job comes with lots of perks including flexible hours, the opportunity to attend various events and meet new people.  But wearing the costume while performing is also extremely hot and can be strenuous on the muscles.

However, these are merely minor drawbacks that she feels are outweighed by the benefits that come with the job.

“I like that it brings people a lot of joy,” she said. “Even if I don’t know them or if they’re having a good day or bad day, you kind of just make them smile and make them have a good moment for part of the day.”

Although being Thor has been an overall positive experience, wearing the costume doesn’t always come with positive interactions.  She recalls one particular bad experience she had at an open house for high school students.

“I guess this one person just didn’t like mascots and she smacked me in the head and it spun around my head so I kind of had a bit of a sore neck after that,” she said with a laugh.  “So I guess that’s one of the downsides too is I get hit in the head a lot by people who don’t realize there’s a person in there.”

Coincidently, Varsity Thor also had a memorable experience at an SA event which resulted in him landing the job.

“It’s a funny story,” he said with a laugh.  “I saw the mascot and out of a surge of bravery, I told my friend, ‘I’m gonna go up to that mascot and ask how I become the mascot.’ So my friend dared me to.  I did it.  I went up to the mascot and the mascot pointed me to the coordinator.”

The SA was mainly looking for an energetic person with a lot of flair and personality to take over for the previous Varsity Thor, Samantha Moase, who had recently retired.  Moase said she needed a break from the suit and retired it in favour of a position with the promotional team.

“It’s hard seeing the new mascot; it makes me miss dancing and acting silly to make the crowd active,” said Moase.  “I miss dancing during half time for basketball. On one occasion the college president was at the game recording my dance and tweeting about me. That was awesome.”

Although he had big shoes to fill, Thor already had past experience. He was a mascot in high school, which he said helped land him the job.

He agrees that the heat of the suit is definitely a downside, but the notoriety and social connections make the job worth it.

“I think it’s to do with sort of, a kind of a fame aspect,” he said.  “No one knows who I am, but I feel people like me when I’m in the mascot suit.  It was kind of one of the things I really liked when I first started doing it in high school.”

He also said that the job is responsible for making his first year of college such a positive experience.

“Its helped me find certain people that I do have a new connection with and has helped me really get into the athletic department which was really something I never saw myself doing,” he added. “I was never part of the athletic department during high school, so this is a really new experience that’s kind of enriched my whole experience of education.”

Even Thunder athletes agree that Thor brings a positive energy and improves the overall vibe of home games.

“It’s just fun to have him around,” said Victoria Waizmann, middle for Thunder women’s volleyball.  “It brings energy to the game. When we have these long period breaks its just something to have there.  Especially if the kids are there, they love him.  It’s so cute to watch them. It makes us all laugh a little bit.”

Although the job can be tough at times, being the mascot is incredibly rewarding and is something he says just comes naturally.

“I just kind of go with the flow and just be me but 10 times more,” he said