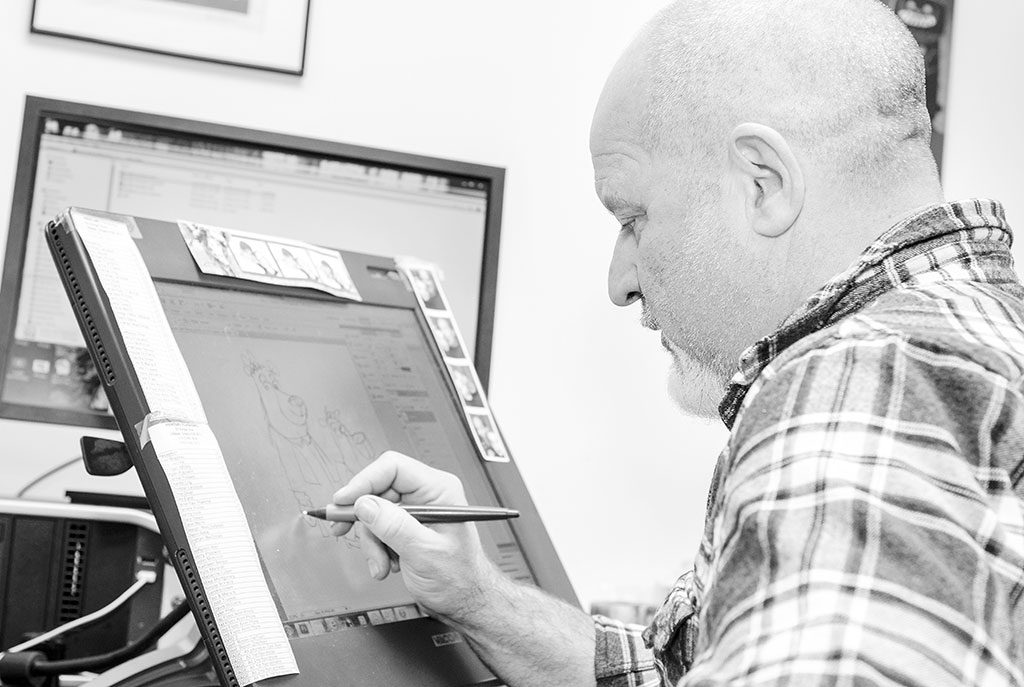 Of all the places to find inspiration, Jerry Popowich would never have thought to look in a local lumber mill.

Among the whine of buzz saws and the clanging of heavy machinery, the Thunder Bay, Ont. native still remembers the day he overheard his then co-worker speak the few, key words that would set him on his path to fame.

A new college-level animation program in southern Ontario had recently opened and was seeking prospective students.

“I immediately submitted my portfolio,” said the Saturday early-morning cartoon fanatic. “Then when I was accepted, I took it as a sign and went for it at the age of 28.”

It was 1990 when Popowich made the drive from Thunder Bay to Ottawa’s Algonquin College.

Today, with an Ontario college diploma and two decades of experience behind him, Popowich has followed his dream of becoming a professional animator.

The 49-year-old now works as vice-president and chief creative officer at Mercury Filmworks, one of Canada’s largest independent animation studios.

Working with Disney and Warner Bros., Popowich has modernized the infamous cartoons of past generations as well as creating new characters of his own. Well-known films such as Looney Tunes: Back In Action or Curious George: the Movie, all credit his internationally renowned animation house for bringing beloved childhood characters back to life.

Yet the Thunder Bay native and one-time lumber mill worker admits that his career path wasn’t as clear at home as it was in Ottawa.

Preparing to graduate high school, Popowich remembers he was the student who would rather paint or draw than study history or English.

As a result, Popowich settled for a full-time job in the forestry industry.

But animation never dropped off the radar.

After nearly a decade of working in northwestern Ontario, Popowich was ready to pursue his passion. First stop, a college diploma.

“I enjoyed my life in Thunder Bay and I wasn’t dying to get out, but I had always wanted to do something in animation,” he said.

This pursuit would motivate Popowich to elevate his passion to a higher level.

Gerry Paquette, who currently coordinates the game development program at Algonquin College, said Popowich’s high standards and determination were the keys to his success.

In return, Popowich admits Paquette was one of his most inspiring role models in the early stages of his career.

“I remember [Gerry Paquette] telling the class animation is hard, not easy and it is going to take a lot of effort. I was scared. But I knew that was my only goal and had to keep going.”

Frame by frame, Popowich began to put the long hours in required to master the anatomy of character movement. The would-be multi-media entrepreneur spent most of his free time working on projects, hanging out with friends in the since torn down E-building.

There is something plainly positive about Popowich – the constant smiling, the way he laughs at himself.  Today, it’s what sets him apart from the standard office executive and what made him easy to connect with in class, says Stephen Young, Popowich’s former classmate.

“Jerry for me has an infectious personality,” said Young, an instructor in the college’s animation program. “He’s somebody you want to be around, very happy and larger than life.”

But it takes more than a great personality to succeed in the animation business according to Young. It demands perseverance, practice, and an uncanny ability to understand the fluidity of motion.

Skills that would reveal themselves through Sphincter Boy, one of Popowich’s first animated projects brought to life through computer-generated software.

The stick figure with shorts became a hit amongst his classmates, and professors.

“I did a series of them when I noticed I was finishing the work off so fast,” Popowich said.

“Then it hit me, I was understanding the timing of animation a lot better than the other guys.”

“He was one of the best in the class,” Young said. “One of the good boys, always working hard and always helping others.”

A classic role model, the soon-to-be animation aficionado was touted by past instructors as a skilled natural. Yet, he won’t admit it himself.

“Starting off was a big struggle, I wasn’t strong,” he said. “But I worked hard, and hard work pays off.”

For Popowich, this meant spending Saturday nights at home practicing his sketching rather than at the bar drinking. Making social sacrifices in exchange for academic achievement, he helped to deliver himself the career high he is living today.

On the second floor of Mercury Filmworks’ headquarters is Popowich’s office. The corner room is spacious, half sun-filled and centred around a large touchscreen tablet on his desk.

His computer monitor flicks on and off with a screen saver of his wife and two young daughters, his “dream team.”

It would be hard to picture someone who has worked on Saturday morning cartoons, those with names like Kick Buttowski of all titles, could straddle being so business-executive serious and yet easy-going.

Poised over his office desk, he focuses on a series of images of cartoon characters.

“I’m thinking of the timing and how they’ll move,” he said. “Looking out for every change of balance in their posture and the stretches that result.”

Today, Goldilocks and the Three Bears are learning how to eat their morning porridge with a spoon.

Still waiting for the Three Bears to jump out of the screen, Popowich appeals to several drawings on the wall for inspiration. Some sketches appear finished, others look as if they were ideas abandoned mid pencil-stroke.

Popowich explains every minor change in volume, silhouette and shadow is accounted for to ensure actions appear fluid, smooth but most importantly, unnoticeable.

During the frequent lulls in the action, usually after a meeting with an art director or a group brainstorming session, Popowich will invariably grab hold of his stylus and start playfully doodling pictures of whatever character is on his mind.  In the background, the symphony of Mercury Filmworks can be heard: the incessant roar of the animal characters on the lobby’s television screen, what sounds like a thousand voices laughing as an art team screens their latest work in the boardroom, all underlined by the consistent beat of a stylus tapping on a tablet screen as if it were a drum.

Popowich speaks openly like someone who is used to thinking out loud as his hands waver back and forth. He reflects back on his recent successes, like Mercury’s 2011 Daytime Entertainment Emmy Award win for the Toot & Puddle animation series, but he doesn’t neglect the lows.

“I remember there was no work out of college, at least not right away,” he said, mulling over one his first part-time jobs.. “I couldn’t afford much by just painting Christmas drawings on windows.”

Travelling across the country, Popowich began working various freelance contracts. He spent five years honing his skills as key animator, character designer and finally, as a storyboard artist. However, his role as an industry trailblazer started at a Vancouver, B.C. baseball diamond.

“Every Friday, the studio I was a part of played baseball against another local studio,” Popowich said. “One night, I told the team I was heading back to Ottawa to find work. One of the owners pulled out his business card and wrote down the name of a person he knew who was opening up a new studio there.”

“I remember flipping over the card to read the address,” Popowich said. “It read: hire him, he’s a good shortstop.”

Popowich credits subtle networking and the great relationships he developed with his co-workers that landed him the job.

In Ottawa, Popowich joined Funbag Animation Studios. His first big break followed, when in 1997 he was hired to direct his first television series, Anthony Ant.

Later in May 2003, he joined Mercury in Ottawa.

In a risky but rewarding move, Popowich and his business partner Clint Eland, influenced the studio to utilize a new Canadian animation software called Harmony. This allowed Mercury to do all of its production 100 per cent in house, increasing its production quantity and value while decreasing the cost of projects.

As a result, the four-person operation quickly grew to over 200 employees.

In June 2012, Popowich was inducted into Algonquin College’s Media Hall of Fame, the second animation grad to ever have done so. The award honoured both Popowich’s career successes and his long-standing relationship with the college long after his graduation.

Sitting on the college’s animation program advisory board, Popowich keeps the content fresh by discussing new trends in the industry.

His studio runs a mentorship program, where students are assigned a Mercury Filmworks supervisor to help bridge the gap between the classroom and animation career experience.

Neil Hunter, co-cordinator of Algonquin’s current animation program, says these types of industry partnerships are vital because they will help to shape the future of the program.

“Getting students involved with studios like Jerry’s helps us establish links with the people who will eventually be running the industry,” said Hunter.

Back in Thunder Bay, Popowich’s sister Dana admits she gets excited when her brother’s name reveals itself in the credits of a popular kid’s television show.

“I believe Jerry has been so successful because his mind is so creative, from his drawings to the lies he told my parents whenever he was late,” she said. “I never knew how much effort and care it took to make a cartoon until I saw him work.”

Paquette echoes this sentiment.  He says his former student has simply flourished in his role as both a manager and animator.

“Jerry took his job seriously and now he’s a shining example of living the dream,” Paquette said. “He shot for the stars and reached them, accomplishing something he can be really proud of.”

In return, the Algonquin graduate is thankful for the place that gave him a start.

“I loved Algonquin, it was everything to me. If I didn’t have that, I wouldn’t be where, or who, I am today.”