You are here: Home / Careers / News / Neuroscientist retires after 50 years 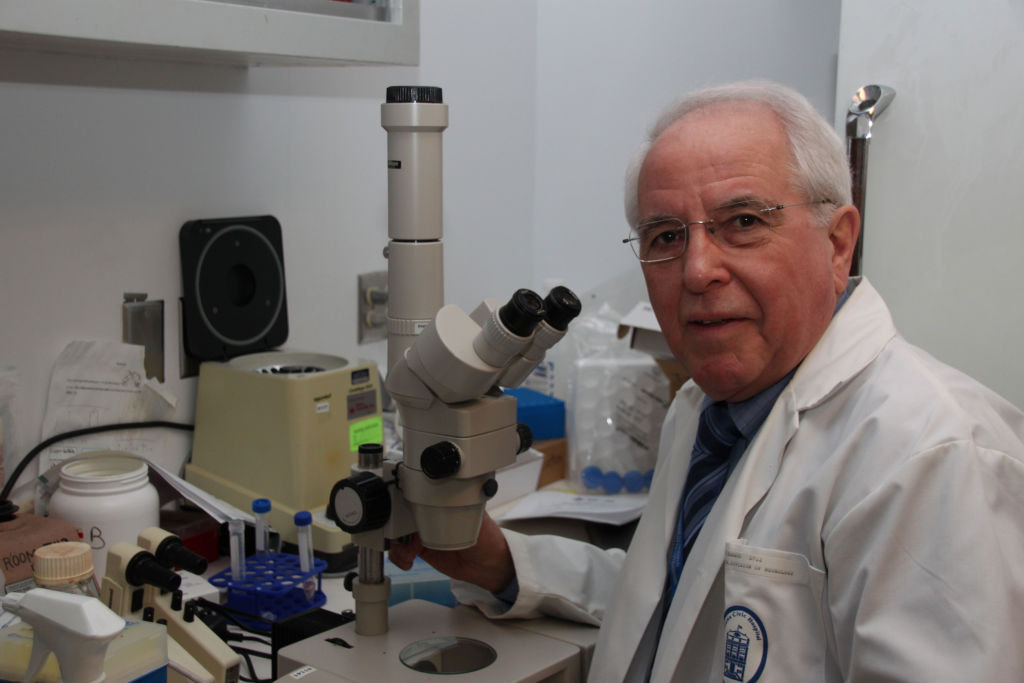 Leo Renaud takes a tour of what remains of his neuroscience lab at the Ottawa Hospital. Renaud is retiring from neuroscience research after working for 50 years in the field. Navigating the very different goals and needs of researches had its challenges. 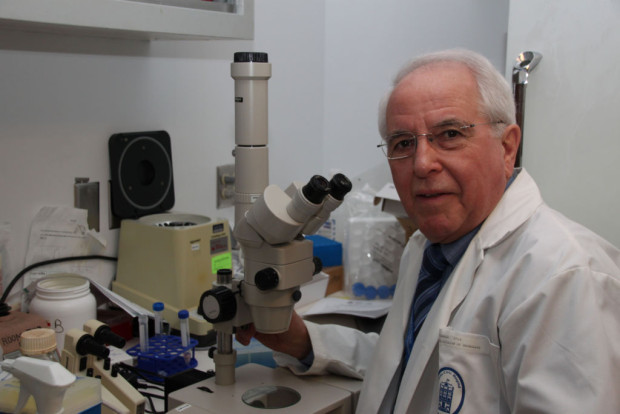 Leo Renaud takes a tour of what remains of his neuroscience lab at the Ottawa Hospital. Renaud is retiring from neuroscience
research after working for 50 years in the field. Navigating the very different goals and needs of researches had its challenges.

Sheets of paper in organized stacks cover Dr. Leo Renaud’s desk. The hallway outside his office at the Civic campus of The Ottawa Hospital is quiet. The late afternoon sunlight shines through the office window, illuminating flecks of dust in the air.

“Is the sun in your eyes?” Renaud asks. “Don’t be afraid to move around if you need to.”

The neurologist sits in front of his computer. He checks a couple of open applications before turning his full attention to the interview.

“We’re getting another paper ready to publish,” Renaud says. He’s a seasoned veteran when it comes to publishing research, with nearly 200 peer reviewed articles under his belt.

This is the final publishing push, as Renaud’s research career is winding down at the end of the year. He has been at the Ottawa Civic Hospital – now an amalgamated part of The Ottawa Hospital – for 25 years and spent the previous 25 at Montreal General Hospital. He is qualified as both a clinician and researcher. He is very well respected by his former students and peers.

“He’s one of the most eminent electrophysiologists in Canada,” says John Ngsee, who was recruited by Renaud in the early 90s. “His credentials are impeccable.”

One student applied to come to Ottawa from Romania because of Renaud’s esteemed reputation as a scientist.

“When I introduced her to Dr. Renaud, she was shaking in her boots,” says Nella Bianconi, Renaud’s administrative assistant at the Ottawa Hospital Research Institute. “After he left, she screamed and said ‘Oh my God, he’s so normal.’”

Renaud’s most recent research involves the effects of cannabinoid receptors in the human body. The two main types are CB1 and CB2. These receptors are activated by cannabinoids that are either produced within the body or introduced into the body as cannabis or a synthetic compound. THC is the cannabinoid that is the main psychoactive compound in cannabis.

The effects and potential benefits of THC are only beginning to be understood. The growing research interest is coinciding with a federal government with a less restrictive approach to cannabis. Renaud says he believes this will lead to a greater understanding about how THC and the brain interact. His latest work will likely open avenues for future researchers.

“I wouldn’t have predicted this,” Renaud says. It is a sentiment that he repeats about many of the aspects of his career. “I would never have thought I’d find myself where I find myself.

“I’m just a country bumpkin who found myself at McGill.”

Renaud grew up 30 miles north of Ottawa. It was his father who insisted that he go to university, and so Renaud enrolled in the arts program at the University of Ottawa. Within the first three weeks, he decided he wanted to change his courses.

“I was bored of history, French, English and Latin,” says Renaud. He switched into the arts pre-med program and entered medical school upon graduation. “In 1960, it was much easier to get into medicine if you had decent marks.”

Once he earned his MD from the University of Ottawa in 1965, Renaud moved to Montreal for his internship. There, he was kept extremely busy. His first day at work began Wednesday morning and didn’t end until Saturday evening.

The long hours were sometimes difficult for Renaud and his family. His wife, Lillian, was the one who raised their two daughters while he was working during the night or out of town for conferences.

Because he often wasn’t home, his daughters were always excited when they did get to see him. Quality time was valuable.

“He would always call to say he was leaving the hospital,” his daughter Barbara explains. “We would get excited as soon as we could see the car. We would hide in the broom closet and he would have to come find us. We were always in the same spot. He always took the time to come find us.

“We never got tired of it. I’m sure he did but he always took the time to do it.”

It was while working at his internship that Renaud “got bitten by the bug” of conducting neurological research. Working in the lab led him to request to do a PhD. The request was met with shock.

“You would get thrown out if you tried to do that now,” Renaud says with a laugh.

It wasn’t until his mid-thirties that Renaud’s own research lab began to operate. Each week he worked as both a researcher and a clinician. It was difficult work but Renaud remembers it fondly for both the work they were doing and the people.

They used to like to play pranks on each other in the lab. There was an aquarium of fish in the lab and Renaud would clean it and feed the fish regularly. His colleagues would give him a hard time about it.

“Every week we would do something to the aquarium to annoy him,” says Dr. Charles Bourque, one of Renaud’s former PhD student. They would put objects like bottles, syringes or even a flashlight in the tank and wait for the reaction.

Another time, Bourque set up a pail of water outside of the door and yelled for another colleague to come out. He set up a camera to capture the reaction.

“They were a good bunch,” Renaud says with a smile. “You need that camaraderie.”

The sentiment is mutual. He has been well respected in all of his leadership positions in both Montreal and Ottawa. He’s the type of leader who leads by example – he walks the proverbial walk.

“I can’t remember ever seeing him mad,” says Bourque.

His positivity was infectious even when the going got tough. And the job wasn’t all fun and games. Creating and heading a neuroscience group at the Civic Hospital had its share of challenges. Renaud was faced with linking the clinical side with those who practiced in scientific research. This involved navigating the very different needs, goals and directions of the two factions. This was sometimes not an enviable position.

“I wouldn’t want to do that,” says Ngsee, who was working for Renaud at the time and saw some of the frustrations first hand.

With the merge of Civic Hospital, Ottawa General Hospital and the Riverside Hospital in 1998, administration issues replaced the cross town rivalry. The transition led Renaud to return to his own work instead of trying to navigate the administrative nightmare.

Renaud hasn’t only faced professional challenges. Not long after moving to Ottawa, things were very stressful. One hot day, he found himself getting very dizzy and nauseous before a function he was meant to attend in the evening. This was the beginning of Meniere’s disease, which is a problem within the inner ear that can cause bouts of dizziness and vertigo. There have been times when Renaud has had to call his wife to pick him up because the symptoms can occur quickly and without warning.

“You can’t function and it’s scary,” says Renaud of the episodes.

The illness also causes progressive hearing loss and tinnitus, which is a constant noise in the background within the ear. There is currently no cure but Renaud has managed to continue with his work by trying to avoid certain triggers, such as stress and caffeine.

He also fought cancer 17 years ago. It was discovered in his maxillary sinus in the early stages. The surgeon was able to remove the maxilla – a bone in the cheek. He had to undergo five days of radiation a week for six weeks which was demanding. He lost 30 pounds in the process.

Renaud’s positive outlook shines through even when he talks about these health setbacks.

“It just makes you feel that every day is a good day,” he says. “You learn to say no when you don’t want to do something.”

Renaud has very few regrets in regards to his career. He says that if he were to do anything differently, he would have finished his neurology residency at the Montreal General Hospital. He says it would be easier to get along with his medical colleagues if he had those full credentials but he didn’t enjoy the clinical work in comparison to the research and hard science.

“I like the science of discovery and new things,” he says. “That’ll keep you awake for a long time. When the going’s good, you don’t want to go home until it’s done.”

Retirement from research will open up free time for Renaud to pursue other interests. He looks forward to spending time with his four grandchildren. He has been amazed watching them grow up – the youngest is 9 and the eldest is 22.

He has also considered taking up the piano again – he made it to grade three piano in high school – but jokes that it might drive his wife crazy. In fact, he’s being modest about his musical talents – he can sing and play guitar, piano and violin.

“He was in a band growing up,” says Renaud’s daughter. “Now that he has more time he’s sort of going back to it.”

She recalls long nights at the cottage when her father, his sister and his brother-in-law would jam. Now and then, Renaud and his sister are asked to play with the country band around Ottawa.

Renaud’s retirement from research is well deserved after a long, grueling but ultimately enjoyable career. He will be greatly missed by the neuroscience community.

Neuroscientist retires after 50 years Reviewed by Sarah Ferguson on March 17, 2016 .

Sheets of paper in organized stacks cover Dr. Leo Renaud’s desk. The hallway outside his office at the Civic campus of The Ottawa Hospital is quiet. The late afternoon sunlight shines through the office window, illuminating flecks of dust in the air. “Is the sun in your eyes?” Renaud asks. “Don’t be afraid to move […]

Sheets of paper in organized stacks cover Dr. Leo Renaud’s desk. The hallway outside his office at the Civic campus of The Ottawa Hospital is quiet. The late afternoon sunlight shines through the office window, illuminating flecks of dust in the air. “Is the sun in your eyes?” Renaud asks. “Don’t be afraid to move […]