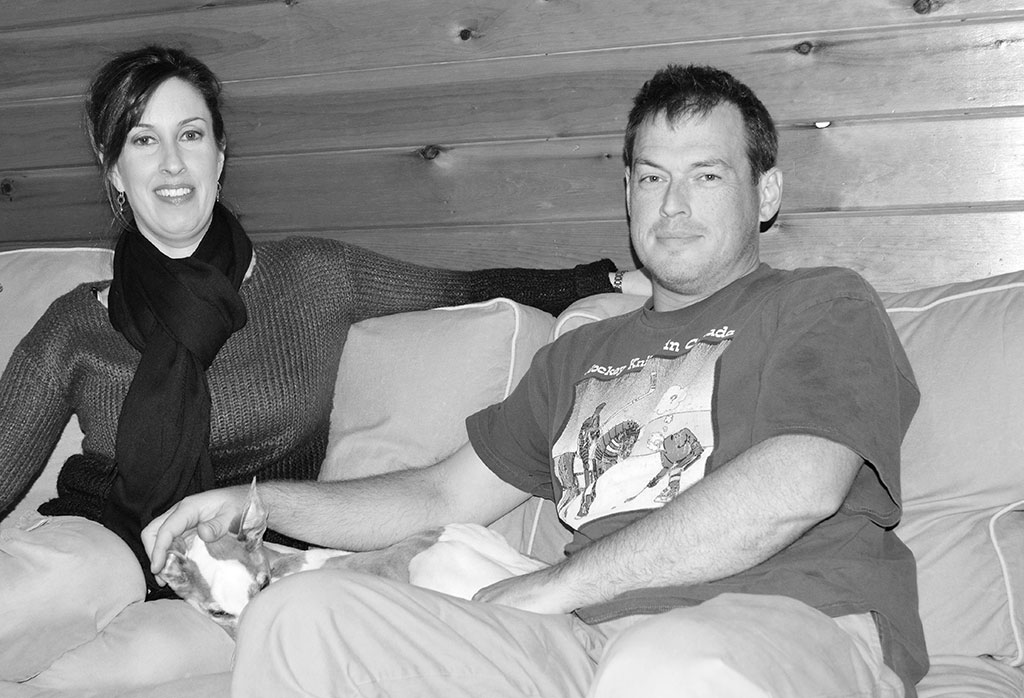 A 41-year-old volunteer firefighter and charity fundraiser finally got the kidney he had been waiting over six years for – from his former sector chief’s wife.

Craig Dunbar, a former Algonquin student from the police foundations program, arrived at home a week earlier than expected on Jan. 21 with a new, hard-working kidney and is currently recovering.

In May 2007, Dunbar had just been married, promoted and was advancing in his career in facilities management with IKEA. He was an active member of his community by volunteering at the local fire station and playing in house softball and hockey leagues.

After spraining his ankle while playing softball and developing a severe migraine, a visit to his family doctor led to a kidney failure diagnosis.

He started dialysis only two days after being diagnosed and had countless complications arise in the years to follow. He ended up opting for home dialysis after two years, where his wife Heather became a part of his health care team.

The physical part of his new job started to be too demanding and Dunbar didn’t have enough energy throughout the day to keep up. Fortunately, he was offered and accepted a job at the Kidney Foundation’s Eastern Ontario office in February of 2012. He started the Spare Parts fundraising team, which organizes and operates events on behalf of The Kidney Foundation of Canada.

“I get to work with some really great people and although I’m working more with the fundraising side, I still get to interact with a lot of other patients and be part of a really cool network of patients who help each other out,” Dunbar said.

In November 2012, Dunbar was told by one of his vascular surgeons that there were only a couple of short term and unpleasant options left available. He let his family know after the holidays, in January. They immediately all got together and started the campaign Kidney 4 Craig which spread instantly all over social media, gathering around 5,600 members.

“I’m constantly amazed by the human spirit,” said Dunbar. “You hear bad news all the time and news that brings out the bad in people, but I never dreamed of the support that would be out there for me.”

Trying to find a donor quickly, Dunbar started hearing from people all around the world – North America, Australia and United Kingdom – and several people got tested and went through the process of seeing if they were a match.

It wasn’t until CJOH picked up his story that his former sector chief in Stittsville, Terry Gervais, and his wife Ann saw on CTV about what Dunbar was going through and decided they must help. Both of them got tested but Ann was the closest match.

“I had people go through the process and still get declined,” Dunbar said.

In November, Ann was approved as a donor and didn’t hesitate to sign the consent form.

“She called me that night after a long day at the fire hall, and told me she had been approved and had signed her consent,” Dunbar said. “I was so tired and exhausted that day that it didn’t even sink in. I went home, crawled into bed and went to sleep and the next morning I got up and was like, I have a donor. This is going to happen.”

He had advanced pre-treatments to get his immune system ready and went into surgery Jan. 16.

“I was really touched before the surgery when I was reading the messages Terry and Ann’s kids were writing on social media about how proud they were of their mom for doing it,” said Dunbar.

Expecting to be recovering in the hospital for a minimum of two weeks, Dunbar was surprised to be sent home only five days afterward.

“They couldn’t argue with the numbers they were seeing from my blood work, the kidney worked beautifully,” Dunbar said.

The Dunbars just recently bought Craig’s childhood home in Carp and are still moving in. He is a little bored with taking it easy and recovering at home, where there are boxes to move and things to do.

“This isn’t my choice of wallpaper,” Dunbar joked about the pink floral, but more modern renovations are to come once he gets better. He loves his backyard where his three dogs can run around and where he plans to grow a vegetable garden in the summer.

“The one biggest thing that people need to take from this is that organ donation really works,” Dunbar said. “There are still too many people on the waiting list and a lot of people don’t make it.”

Dunbar was fortunate, and when he gets better he plans to work full-time at the new job he loves, continue to promote organ donation, start re-decorating the new house and get back to fighting fires from the local station.

“I’m looking forward to being back on the floor, back in the trucks,” Dunbar said.

For now, it is critical for Dunbar to take it easy for the next three months. It will take a full year for him to fully recover and he will require anti-rejection pills for the rest of his life. The way Dunbar sees it: small price to pay for a big chance at a new life.

“How do you put it into words: the amount of support I have gotten from my family and my friends,” Dunbar said. “I am a pretty lucky guy to have them all around me.”