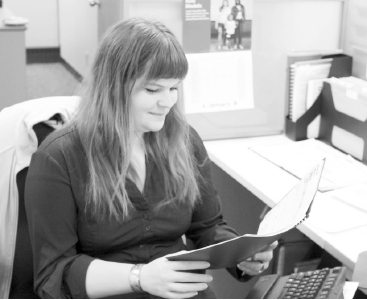 On a typical work day, Jamie Lunn may carry papers or hold a notebook using two hands, an act which would be unremarkable if one of those hands were not on a prosthetic arm.

Her arm ends just below the elbow and cannot fully extend. But a sticky set of flexible, stationary fingers carries the items.

But in spite of what some may regard as a disadvantage, Lunn also organizes child amputees with The War Amps CHAMP program who want to volunteer to spread the word through projects, events and presentations. She also participates in these as a public speaker. And she takes care of the booking when she and James Jordan, her work partner, must travel around Canada.

Her tourism and travel degree from Algonquin helps with the latter. And she carries those skills into her position as the public awareness officer for The War Amps.

Currently Jamie is working on the promotion of The War Amps key tags. This service allows people to put a tag on their key chains, allowing anyone who finds them lost to put them in a mailbox. Canada Post ships these to a plant in Toronto which has mailed over a million key chains back to their owners.

“It is a free service to Canadians,” said Lunn. “If people find value in the service they choose to donate.”

Student key tags are a part of the program. They’re given to university students yearly and they last for a year.

A trip around Alberta has been planned for visiting registries and raising awareness about the service. But Jordan is not concerned about it with Lunn’s abilities in travel planning, a skill learned in tourism and travel.

“She planned this whole trip for us around Edmonton,” he said, “…planning meetings around different time schedules and how we’ll be able to get from point A to point B across Edmonton…. She plans it out really well.”

Lunn and Jordan know each other as friends from growing up in the same small town before working together.

“I remember being inspired by Jamie as a kid,” said Jordan. “She didn’t care about wearing a prosthetic limb and showed it around to everyone or [she would] not have one in and not care what everyone thinks.”

Lunn remembers kids treating her differently, but took it in stride.

Having been born the way she is now, Lunn has been in the CHAMP program since she was a child. She could swim and play in the sand with a swimming arm and catch a baseball with a prosthetic made for that. “As a child growing up you grow out of an artificial limb as much as you would grow out of shoes,” she said, however.

When you take into account the repair costs and replacements, prosthetics are extremely expensive. Without The War Amps, she said the prosthetics would have been too expensive.

“It’s amazing what they do for kids across Canada in giving them limbs like this,” said Jordan, who has a $25,000 limb called a myoelectric arm that has a grip. “I want to make sure the kids have everything they need emotionally, physically and financially. Thank God for The War Amps.”