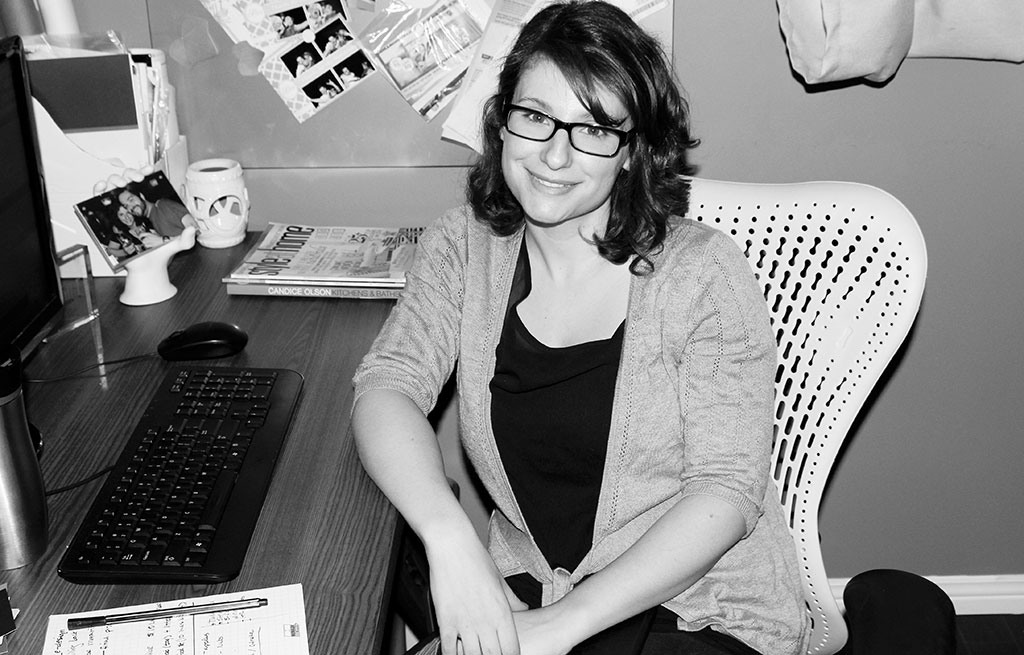 Sarah Daniele working at her in-home office for her innovative new interior decorating business, Mydoma, which was launched in August of 2013.

Frustrated by the lack of technology in the business of interior decorating, an Algonquin graduate has decided to go out on her own and do things her way.

In August of 2013 26-year-old Sarah Daniele, took a leap of faith and launched Mydoma, her very own interior decorating and consulting business. Having graduated from Algonquin’s interior decorating program in 2009, she felt she had gained enough experience to run a technology friendly company.

Daniele has had a love for decorating since childhood and would often re-decorate and re-design her bedroom.

“I liked the combination of creativity and also being technical,” said Daniele.

Although she felt that the program allowed her to test all potential career opportunities she found that Ottawa only catered to government and residential jobs. After having three different fulltime jobs she decided to take the risk and step out on her own.

Daniele employed the help of guest decorators enabling her to build and be a part of online communities that are design-focused.

One of those writers, Christa Rumleskie feels that having a strong online social media presence is important because it helps get people talking about design.

This has helped to not only grow her brand but also to help fellow designers grow theirs. This led Daniele to decide to shift the focus of Mydoma from assisting with designs to also assisting designers with web help and lessons in social media.

“I just found that not enough companies are using it,” she said.

Daniele knows that when people are looking for information the first thing they are going to do is look online.

This past August with some help from her husband fellow Algonquin alum and front end web designer, Tom Martineau, she launched Mydoma Studio.

The site has the purpose of proving online tips, advice and pre-constructed design packages for mostly kitchens and bathrooms which Daniele specializes in.

Keeping the site updated weekly has helped Daniele make connections throughout the design community. She has been contacted by companies in Toronto and the United States as well as locally.