Grad gets ‘Delightful Taste’ of success 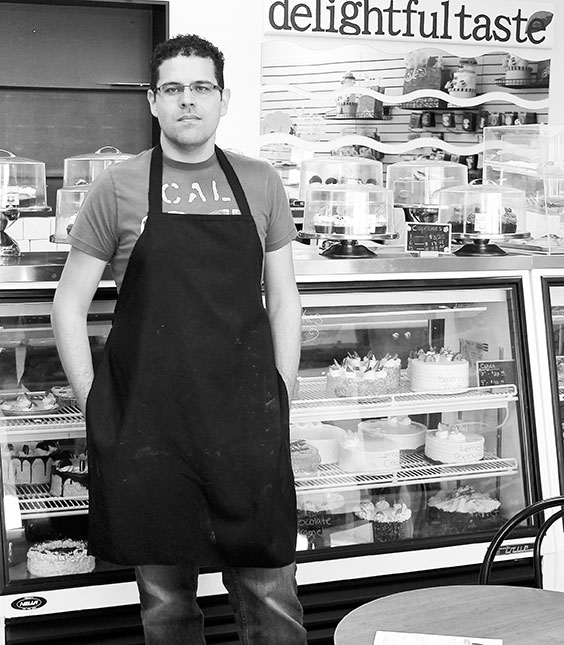 Culinary management grad, Guil Fernandes, stands by the counter in his self-owned bakery Delightful Tastes. The bakery offers a variety of gluten-free, nut-free and sugar-free treats.

Guil Fernandes grew up with a never-ending craving to make cakes, cookies and various other delicious desserts while helping his mother at her bakery in Brazil.

So it was only fitting that he opened up his very own bakery, Delightful Tastes, right here in Ottawa during his two-year culinary management program at Algonquin.

As a graduate of from the class of 2011, Fernandes not only moved on to start a successful business in his own field of study, but he did so while in school.

“I went to Cordon Bleu and I also took a wedding cake course in Brazil, before coming to Algonquin,” stated Fernandes. “But at Algonquin I have taught my own classes on chocolate works, gum paste flowers, summer baking and pastry classes and of course, cake decorating.”

As an enthusiast for the college, Fernandes also loves to contribute. Once managers from the Tea Shoppe caught wind of his baked goods business, he began selling some of his cookies stamped with the Algonquin logo there. He also takes applications from culinary management students who want to do their co-op placements at Delightful Tastes, taking in two new students just this year.

One of those students, Alex Bradley, a first year baking and pastry arts student, just began his co-op on Feb. 1 and finds that it has a lot to offer.

“I love the slow pace, just baking cookies and cakes all day… I’ve also learned good techniques on baking and everyone here is very nice,” stated Bradley. “I hope to hook up with a hotel in the future as a pastry specialist, hopefully get to travel and see the world while baking.”

Fernandes plans to help mentor students like Bradley to follow their dreams, but he also says there are a few important things for any students to remember when making the first step into starting their own business.

“You have to think over, and over, and over,” he said. “Don’t jump without a plan, and it can be very stressful so you have to make sure it’s what you want. I learned from my program at Algonquin that it is important to be consistent, have a good plan, hire a good set of staff and make good quality products.”

Good quality products are something Fernandes specializes in, creating his business around the concept of sugar-free, gluten-free and nut-free desserts. After growing up with a diabetic father unable to eat sugar and a best friend who was unable to eat products containing gluten, he realized the lack of bakeries with different options.

He also wanted to create a place where schools or families with nut allergies could go to get sweet treats for everyone.

“I hope to franchise my company. Over the next four years I would like to expand and hopefully get the opportunity to be more large-scale,” he stated.

Plans are well on the way for expansion with three Ottawa locations already on the rise at the Carlingwood Shopping Centre, Greenbank Road and a larger Bank Street location known as the Delightful Tastes Café, which also offers sandwiches, soup, coffee and paninis.