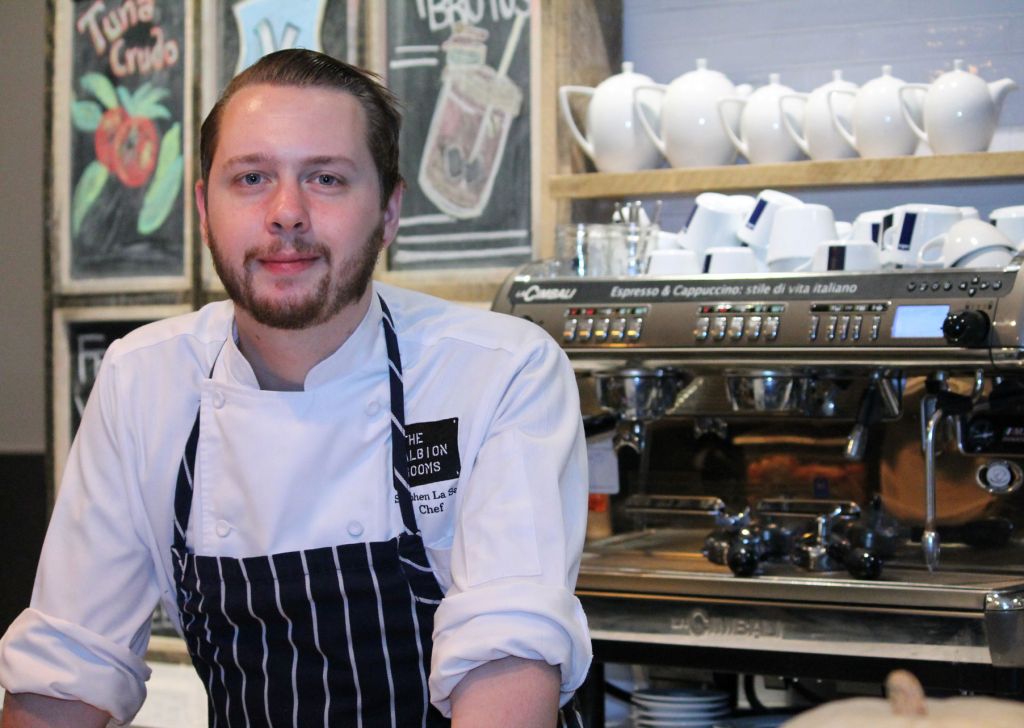 Stephen LaSalle, a graduate of the culinary management program was recently named a top three “kitchen wizard” under 30 by Ottawa At Home.

A little determination, a lot of talent and a dash of creativity will cook up a great restaurant business plan, but the true secret ingredient?

Stephen LaSalle, a graduate of the culinary management program who was recently named a top three “kitchen wizard” under 30 by Ottawa At Home, can vouch for that.

Taking a break from university, LaSalle took on a job as a fish monger in the ByWard Market.

“I saw all these chefs from the restaurants in the area coming in and talking about what they were cooking at their restaurants,” he said. “I started cooking at home then and not long after I enrolled at Algonquin.”

LaSalle took it upon himself to begin working while in school, getting his first restaurant job at a small family restaurant.

“I was surrounded by passionate people and I was able to feed off of that positive energy,” he said.

LaSalle jumped around to many restaurants during his time at Algonquin. He went from the family restaurant to an Asian fusion restaurant all the way to Juniper Kitchen & Wine Bar.

After graduating, LaSalle landed a job at ARC Lounge in the ARC Hotel in downtown Ottawa.

“I cooked breakfast, sandwiches, fine dining – I truly saw it all,” he said.

He then took a brief break from ARC Lounge, moving to the Whalesbone.

“It just helped me hone my skills and gather some more discipline,” he said.

“I was surrounded by passionate people and I was able to feed off of that positive energy.”

Coming back to ARC Lounge, LaSalle quickly worked his way up from chef de partie to sous chef but he wasn’t going to stay for long.

A friend who worked at Nortel Hotel told LaSalle about a new project the hotel was working on. LaSalle sent in his application to join the development team and was accepted for the head chef position at what would be the Albion Rooms.

“We worked it from the ground up,” he said.

In March of 2013, the restaurant opened with its own “Albion concept.”

“It’s Canadian,” LaSalle explained. “Everything’s farm-to-table and we really just want to tell a story with the food. We also want to up the cocktail culture here in Ottawa.”

The restaurant achieves this goal with key elements such as a beautiful wood bar where guests can get fresh charcuterie or have a whole dinner experience at their table.

“We didn’t want to be a regular hotel restaurant that just served hotel guests,” he said. “We really wanted to draw people in and play to the people of Ottawa. Most of our guests so far are people from Ottawa so it’s good.”

The restaurant is doing so well it was recently renovated and had its hours expanded. The restaurant now has a breakfast-serving room that looks like a cozy kitchen. Guests can watch the chefs cook up their meals. The restaurant had never served breakfast before.

“We’ve had a great run so far but there is room to grow,” LaSalle said. “This is the first ship I’m captain of and I have to continue to steer it in the right direction. For every goal I cross off my list, I write down two more. This is just the beginning and hopefully we’ll keep our momentum going.

“When you’re at Algonquin, you’re all young guns ready to take on the world. The school just gives us a little seasoning to get us ready.”