From computers to country 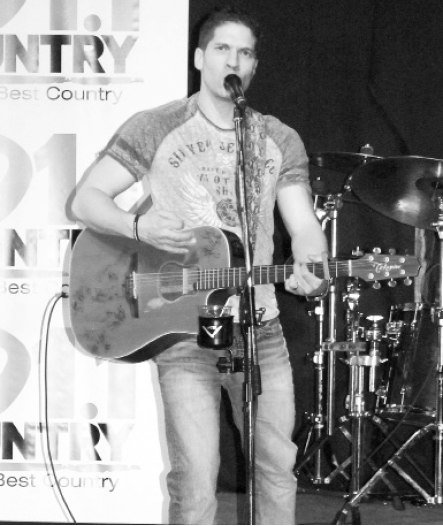 With his charm and good looks, country singer Rory Gardiner uses his charisma and humor to grab the attention of whoever hears him play, even if you’re not a country fan.

Whether he’s singer his latest single or a cover of Shania Twain’s Man, I Feel Like a Woman, Gardiner is the definition of a crowd-pleaser.

Straight off the heels of Gardiner’s second album, the title track On My Own was co-written by country singer Tim Hicks, who performed with Gardiner at the Commons theatre back in February.

Though Gardiner admits he didn’t always realize his talent as a country singer. Graduating from computer systems technology in 2002, Gardiner went on to create a software company, which became widely successful.

“It’s just like showing the workings in a math equation” said Gardiner. “Starting the software company lead me to save enough money to produce my first album, then my second album.”

Originally starting off as a rocker, Gardiner only realized his talent in 2007 when he appeared on an American Idol-type reality show for upcoming Canadian country singers where he made the semi-finals.

One of biggest opportunities Gardiner took advantage of was going to Nashville, T.N. and working with professional producers who use their talent to lay the foundation of country albums.

“Most people don’t even realize these opportunities exist and they go about it the wrong way by just trucking around Ottawa,” said Gardiner. “You basically bring your songs to them and the lay the tracks together, these guys are so good it literally takes two takes.”

Radio personality Mary Anne Ivison from Country 101.1 says the most important thing about Gardiner is his passion, which is what really makes you stand out from everyone else who is vying for the same goals.

“I think Rory is a really smart guy and he knows exactly what he needs to do to figure out how to get in,” said Ivison. “He’s very persistent, very smart and extremely talented.”

Gardiner flies between Nashville and Ottawa once every couple of months to not just work on songs but to gather inspiration and connect with the music. Tim Hicks has acted as somewhat of a mentor to Gardiner since launching his career.

“Tim and I have been friends before Tim Hicks became Tim Hicks,” said Gardiner. “Except the only difference now is he’s a little less reachable.”

Gardiner also uses his writing and musical skills by creating jingles for pharmaceutical companies and most recently licensing his latest track to a new hunting and fishing show airing on Wild TV.