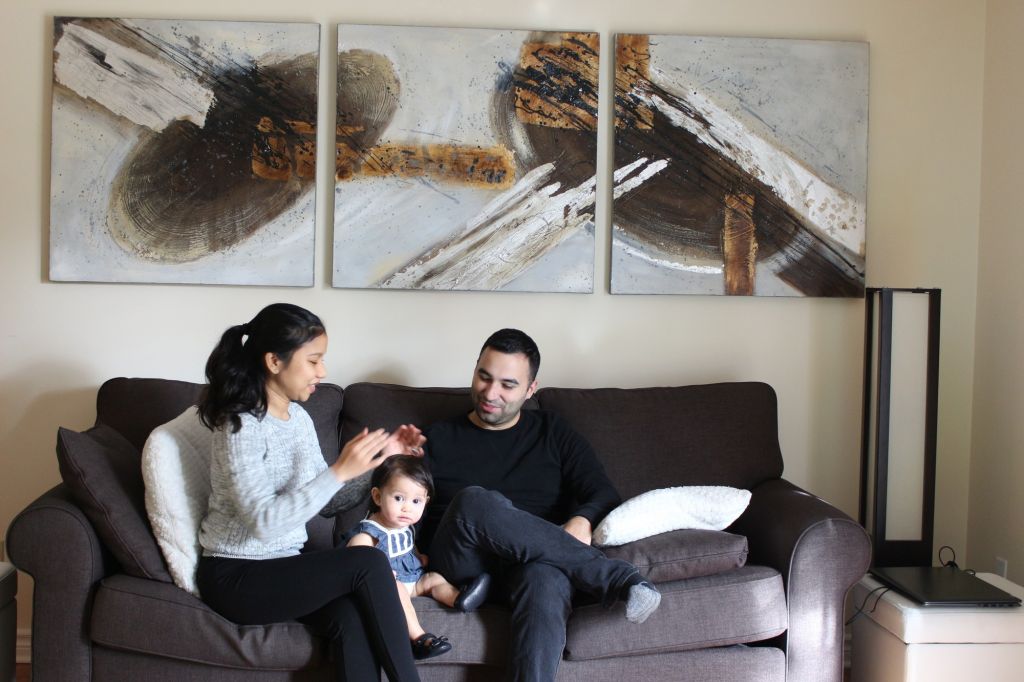 Philip Parisot sits in his living room with his young family, wife Rizza and daughter Carmen. He worked as a volunteer on Clive Doucet's mayoral campaign for the Oct. 22 election. Parisot credits his wife's support for allowing him the time to work on the campaign as they both believe in bettering their community. Photo credit: Tricia Surette

Philippe Parisot, a 28-year-old Algonquin student, worked on Eleanor Fast’s provincial campaign for the NDP in Ottawa South this past spring. It is there he met James Brunet, a 22-year-old Carleton University student who would go on to be Clive Doucet’s campaign manager.

It was through Brunet that Parisot found himself canvassing door to door with Doucet who was running for mayor in the Oct. 22 municipal election.

“The bug bit me,” said Parisot. “It’s so gratifying, it feels so good.”

Parisot is in his last year of computer engineering and will be graduating in the spring of 2019. He recently established the AC NDP New Democratic Party club at Algonquin and it has 15 registered members. Parisot would like to see more people join the conversation and get involved but recruiting new members is challenging.

“(I’m) pretty much doing everything myself; trying to get a vice-president, trying to get a new president because I’m only here for a year,” said Parisot. “I was not democratically elected. I believe in a democratic process so I was trying to recruit as many people and trying to launch an election but unfortunately there’s just not enough engagement.”

Parisot hasn’t always been politically-oriented, however it does run in his family. His father worked for former prime minister Jean Chretien for nine years and his mother’s family fled Chile as political activists running from a dictatorship. Parisot knows from hearing their stories what it is to live in a society where it is unsafe to stand up to government and to flee your home country for fear of persecution.

Parisot is passionate about his beliefs and when he was first asked to work for Doucet, he was hesitant to support someone he barely knew.

“As the campaign went along and I got to know Clive better and got to know Jim Watson better, that’s when I realized, especially when it comes to (issues like) Herongate and the environment and just basic democracy,” Parisot said. “The fact Watson wouldn’t even show up to debates, that’s when my support for Clive got really cemented.”

Canvassing is often a gruelling job as many people have already decided who they are voting for and you get a lot of doors closed in your face. But with the mayoral race it was different.

“It (canvassing) was really good,” said Brunet. “I’m used to canvassing in provincial elections where you have three/four parties and the reaction you get at the door is pretty bad. When I was campaigning for Clive I noticed how many people were undecided and it was everyone I ran into. It couldn’t have been more than one in five who had decided to vote for someone else.”

Parisot was a big energy behind their canvassing. Both Brunet and Doucet mentioned his energy and his passion when going door to door and talking about the issues in the city. The night of the vote, after all the ballots had been tallied and Doucet had been forced to admit defeat, he mentioned Parisot in his speech and specifically thanked him for all the work he did canvassing door to door.

Despite having no political background, Parisot’s energy got him noticed.

“Brunet invited me to the policy-making meetings,” said Parisot. “Even though I had zero experience with policy making, like none whatsoever, he invited me and I said yes. It was an incredible experience.”

At one point when they were talking about Doucet’s regional rail policy and looking for a name, Parisot suggested “Capital Regional Rail” and it was unanimously adopted.

“It was pretty funny,” said Parisot, “They were like, ‘That’s your ticket'”

Parisot also organized to have Doucet come to Algonquin and set up a table to speak to students as part of his campaign. Doucet didn’t hesitate, even though students are often one of the hardest demographics to get out and vote.

“A lot of (students) he reached out to had no idea who Clive was,” said Parisot, “After a short chat with Clive they were on board, they were impressed, motivated and excited. That’s all it took!”

Parisot credits the support of his wife Rizza for making it possible for him to get out and support Doucet. They have been together for 10 years and have a nine-month-old daughter. While his wife was at home taking care of their daughter, he was often out canvassing and volunteering for Doucet’s campaign.

“(Rizza) agreed to do this because she agrees with the cause,” said Parisot. “She’s an unsung hero in my eyes. She probably worked a lot harder than I did because taking care of a kid is not like knocking on doors. Knocking on doors is a piece of cake compared to like sleep and all that stuff.”

This being the first major campaign Parisot has worked on, there were lessons to be learned. He said he learned three: “you are not alone…if you don’t try, nothing will ever change” and that “our democracy isn’t perfect.”

But he’s still ready for more.

Parisot is eyeing the federal election in 2019, though as yet there is no NDP candidate for Ottawa South.

“I’ve been living here for 10 years,” said Parisot. “And I feel like Ottawa South can do a lot better for itself. It hasn’t reached its full potential.”

Parisot has lots of ideas for improving services and the lives of the people in the neighbourhood and he’s willing to put the time in to help advocate for them. He wants to see the community’s needs met and he wants to look after those who are less fortunate.

But Parisot knows it takes work and long hours; it also takes compassion and passion for the people and the issues, all of which he displays in abundance sitting at the dining room table talking about his experience on the campaign trail with Doucet. It was never entirely about winning but bringing more awareness to issues like the inclusionary zoning and making public transit more affordable for everyone while also improving services.

“We had three goals,” said Brunet. “First goal was to have a better mayor. The second goal was to hopefully be able to influence the policy of the current mayor and I think we were successful in part on that. Jim Watson reversed his position on safe injection sites during the campaign. He announced that he would prioritize inclusionary zoning in his next term. He also announced some small stuff around senior transit. It seemed like he pulled a few things from our platform. The third goal was to give people who are progressive in the city an option at the mayoral level.”

Despite Doucet not getting elected, neither Parisot or Brunet have any regrets. The hours were long and at times the work was hard and it was crazy keeping up with Doucet’s non-stop schedule. They found ways to have fun and Doucet was easy to get along with.

“Sometimes (Doucet’s girlfriend) would walk into the office and start doing this little dance and Clive would start doing the dance with her and they would start getting closer to each other and start dancing like that,” said Parisot. “I just thought that kind of dynamic between a couple during a full-blown electoral campaign was so refreshing to see. We had like this really human guy that was trying to get elected.”

Philippe Parisot, a 28-year-old Algonquin student, worked on Eleanor Fast’s provincial campaign for the NDP in Ottawa South this past spring. It is there he met James Brunet, a 22-year-old Carleton University student who would go on to be Clive Doucet’s campaign manager. It was through Brunet that Parisot found himself canvassing door to door […]

Philippe Parisot, a 28-year-old Algonquin student, worked on Eleanor Fast’s provincial campaign for the NDP in Ottawa South this past spring. It is there he met James Brunet, a 22-year-old Carleton University student who would go on to be Clive Doucet’s campaign manager. It was through Brunet that Parisot found himself canvassing door to door […]