You are here: Home / Careers / Algonquin grad makes her mark on culinary scene 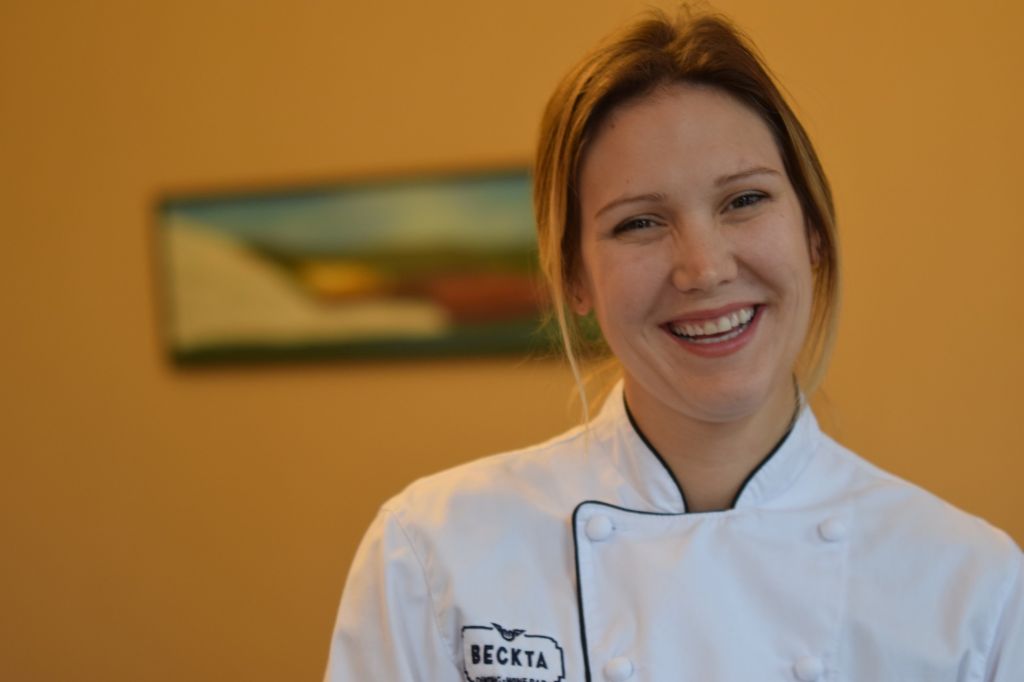 Chef Katie Ardington, a graduate from Algonquin's culinary management program, is now the executive chef for Beckta Restaurant Group after a few years working for Prime Minister Justin Trudeau and his family.

For many culinary graduates, working in a small kitchen while facilities are under repair with one sous-chef might not be the dream. But when that kitchen is at Rideau Cottage and you’re cooking for Justin Trudeau and his family, it’s a different story.

In 2017, this was the reality for Algonquin College alumna, Chef Katie Ardington.

With the help of a connection, the now 33-year-old was able to apply for the opening and landed the job of a lifetime. From French-Canadian to Asian-inspired cuisine, Ardington had the opportunity to cook Trudeau family favourites while maintaining a positive relationship with the family.

“It was a great experience,” she said. “It was wonderful getting to work with the family and a great staff.”

But this wasn’t the first or last significant moment of her professional life.

Since her graduation from the college’s culinary management program in 2007, she has been presented with many opportunities to expand her career and make a name for herself.

She began working immediately as the chef de cuisine at Play Food & Wine, located in the heart of the ByWard Market. From there she was able to move around in the company and eventually became a chef at Beckta Dining & Wine on Elgin Street. Following this, she took a brief break from the restaurant scene and that is when she started cooking for the Trudeaus.

The opportunities have given her a wealth and diversity of experiences.

“It’s extremely different,” she said. “You go from writing menus for a variety of people to choose from, to creating food choices specifically for a family’s needs and wants.”

Ardington is now the executive chef of the Beckta restaurant group, where she oversees Play Food & Wine, Gezelling and Beckta Dining & Wine — all restaurants in Ottawa.

She grew up in Brockville and besides cooking dishes alongside her parents, the first memory she has of trying to perfect an item is a fried egg. While her eagerness to learn more and work on her craft really took off from there, the position of executive chef wasn’t always her goal.

“It was never a title I aimed for in the beginning,” she said. “I knew I loved cooking for people and then my passion and career followed.”

While looking for a post-secondary option to explore this passion further, she eventually settled on Algonquin. She wanted to stay close to home and knew that the college had a good reputation for culinary management.

Chef Sean Edwards, a professor with the school of hospitality and tourism, taught Ardington in her second year in practical classes such as restaurant and nighttime dinner service. During that year he was able to see her impressive skills first-hand.

“She was very quiet and shy, but she was very passionate about cooking,” he said. “It was really obvious to me that this was something she wanted to do for a living.”

According to Edwards, she was never the type of person to say no. She was extremely giving with the other students in the program and always helped when someone needed something.

He explained that many successful chefs come from the program and that while the professors do their best to guide them, students like Ardington are self-motivated and talented on their own.

In his view, she has the ability to make an impact on the chefs of the future.

“I think that Katie is someone who should be a mentor for all cooks because she worked hard and devoted herself to her profession and has gone on to work in her dream career after her schooling ended,” Edwards said. “Students need to look at her and know that they can do it too.”

Edwards has maintained a positive relationship with her since she graduated and describes her as a phenomenal person who has done everything possible to push herself in her career.

As a professor, he is happy to see his students do anything after graduation, but to see Ardington create this much success for herself is the icing on top of the cake.

“Everyone here is really proud of her,” he said. “She is incredibly giving and generous and has done so many incredible things that it’s impossible not to be proud of her.”

On top of her years of experience, Ardington has received her fair share of accolades. In 2010, she was awarded with the Top 30 Under 30 Award from the Ontario Hostelry Institute.

“I was lucky enough to be nominated,” she said. “I had to submit menus, articles and any involvement that separated me from others in the hospitality industry.” Following this, it was clear that she is one of the few in Ottawa that stands out.

Through all of this, Ardington credits her success with listening, working hard and saying “thank you,” a lot. While she has had the passion for almost her entire life, her love for cooking continues to develop.

“I’m inspired every day,” she said. “I love meeting new cooks and learning from someone who has a different skillset than me.”

According to her, being a chef means you can make an impact on someone’s day and leave a lasting impression.

“Everyone needs to eat and most people love to eat,” she said. “I love being a part of a memory or a good part of someone’s day.”

As for what’s next for her career, the sky is the limit. While she is unsure of where she will end up, she is happy with where she is at now and will continue on her journey to become a better chef.

For many culinary graduates, working in a small kitchen while facilities are under repair with one sous-chef might not be the dream. But when that kitchen is at Rideau Cottage and you’re cooking for Justin Trudeau and his family, it’s a different story. In 2017, this was the reality for Algonquin College alumna, Chef Katie […]

For many culinary graduates, working in a small kitchen while facilities are under repair with one sous-chef might not be the dream. But when that kitchen is at Rideau Cottage and you’re cooking for Justin Trudeau and his family, it’s a different story. In 2017, this was the reality for Algonquin College alumna, Chef Katie […]