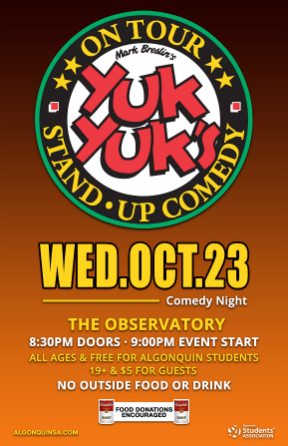 Jokes about platonic male friends and political scandals from well-known comedians Christina Walkinshaw and Nick Beaton highlighted the Yuk Yuks Stand up Comedy Club at the Ob on Oct 24.

Walkinshaw, a student at Carleton University, started in Comedy when a fellow classmate told her she would be good at it.

“An attractive fraternity guy at Carleton University told me I was funny and I should do it,” said Walkinshaw. “I started in comedy a week before my 19th birthday when I was in the journalism program, which wasn’t going well.”

“I first went to the show and I didn’t expect to be funny right off the bat. I thought I might suck, but when I watched the comedy show I thought, ‘Okay, as long as I think I can be funnier than the worst person in this show I’ll do stand up comedy,’” said Walkinshaw.

Beaton, who has performed at the Just For Laughs Comedy festival in Montreal and has received numerous awards for his comedy like the 2007 Just For Laughs Toronto Homegrown Competition, always enjoyed performing before he got into comedy.

“I started off by playing in bands and I wasn’t as good at that as I wanted, I was funnier, so I tried out Comedy,” said Beaton.

The show started off with Walkinshaw taking the stage and talking about her friend’s problem with finding a man that is ready for marriage.

“My friend said ‘Christina, I am like a house for sale and this man has been coming week after week to look at this house and hasn’t put in an offer. It is time for me to show the house to other people.’ She is now divorced twice so I said, ‘Maybe it’s time to renovate the basement.’”

Beaton continued the show with jokes about Lance Armstrong’s steroid scandal and the problems with social media like Twitter and Facebook. Everyone in the Observatory was cracking up from the multitude of jokes the two comedians were coming up with.

“I grew up watching Derek Edwards, Irwin Barker and Mike Bullard on Just For Laughs, I like a lot of Canadian comedians like Heidi Foss,” said Walkinshaw about who her inspirations are.

“I got to keep it real, love my Canadian comics.”