Which February video game are students most excited for? 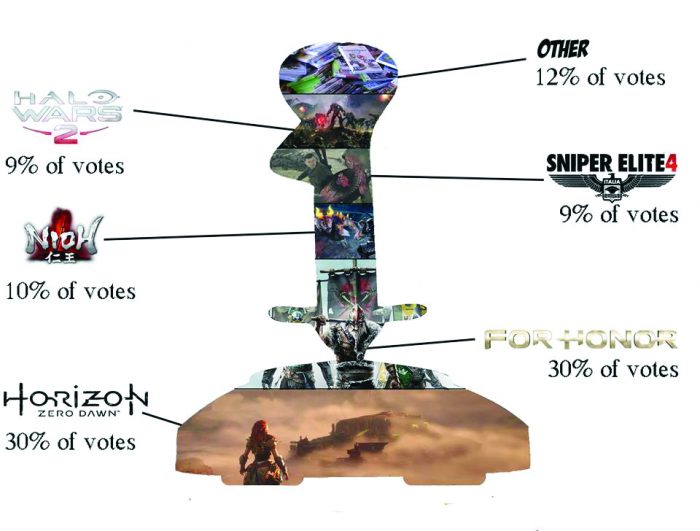 In the most recent poll for the Algonquin Times, students voted for which video game release they were most anticipated to play in February.

A total of 162 votes were counted in this poll.

Tied for last place with 14 votes each was Halo Wars 2 and Sniper Elite 4. Sniper Elite 4, despite the low vote count, still managed good reviews from both critics and gamers alike.

Halo Wars 2 is set for release on Feb. 21 but with the low vote count, this could be the start gamers losing interest in the Halo franchise.

In third place with 16 votes came Nioh, the Playstation 4 exclusive that opened at number two in the U.K. Nioh was also sold out at both Walmart and Amazon within the first week of release.

And finally, tied for first place with 48 votes each was For Honor and Horizon Zero Dawn. For Honor excited gamers when Ubisoft showed off its gameplay trailer at E3 displaying exciting combat mechanics and beautiful graphics.

While being published by Sony might hurt Horizon Zero Dawn after the failure of No Man’s Sky last year, the trailer still got the game enough hype for it to be nominated for most wanted and most anticipated game at the 2016 Game Awards and Golden Joystick Awards.

Some of the other options students chose in the other option of the poll was Batman LEGO Dimensions, Total War: Warhammer, Ghost Recon: Wildland and The Witcher 3, which is strange because Witcher 3 was released on May 19 last year.

To vote in the next Algonquin Times poll, visit @Lov3Glov3 on Twitter or check out the Algonquin College Reddit page.