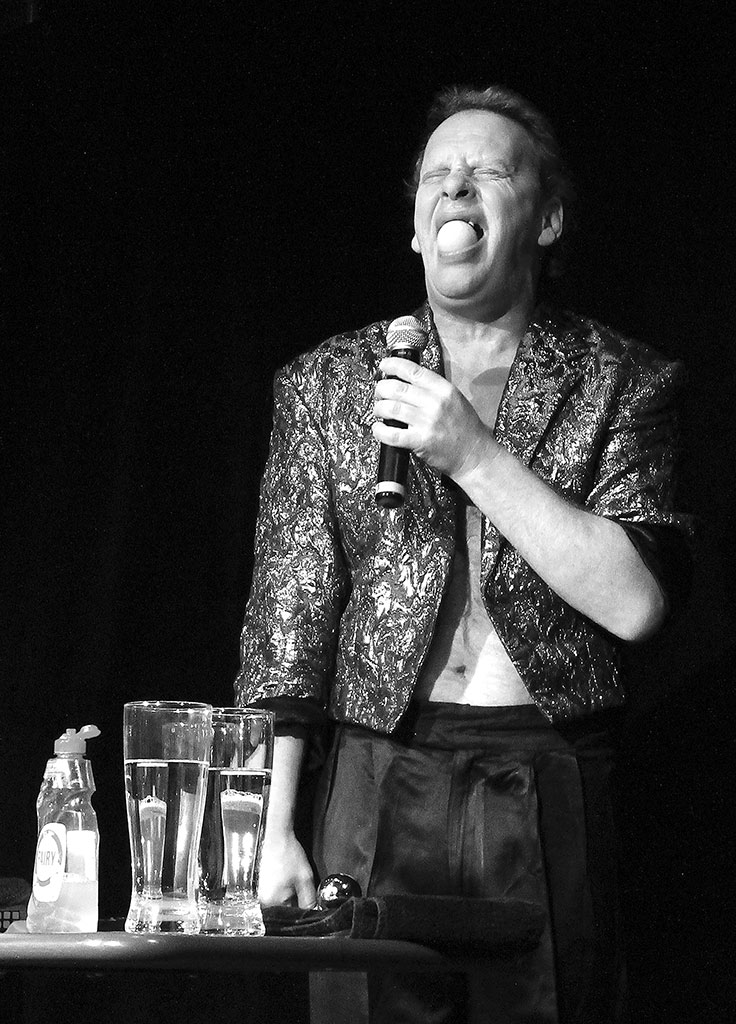 As Stevie Starr stood in front of a packed crowd he swallowed a fish, along with some gasoline. He then blew flames from his mouth and returned the fish to its tank without a scratch.

This is just an average day for Starr, who travels the world for his regurgitating show, stopping by the Observatory on Feb. 27 to shock Algonquin students with his unique talent.

“There is nothing I can say to prepare you for what you are about to see,” stated manager Mike Malley before Starr hit the stage to ingest an array of items, from dish soap and lighter fluid, to Rubik’s cubes and diamond rings.

“When I was five-years-old I lived in a children’s home in Scotland where I started swallowing pocket change as a joke,” replied Starr, 47, when asked about the start of his bizarre talent. “Then I realized that I could cough it back up with no trouble.”

After years of entertaining his friends with this unusual talent by swallowing and regurgitating everything from candy at local shops to bees off of flowers, Starr knew he could go somewhere big.

“I started my shows when I was 18 in Scotland, then in England, and eventually I came to America and Canada,” he stated. “Now I preform about 90 per cent of my shows at college and universities, and the other 10 per cent in Europe at nightclubs.”

For Starr, presentation is everything, so it came as no surprise when he did a few shocking things involving the audience. After calling one student, Marco Gloriani, to the stage to light a flame for him, Starr shocked the crowd by bellowing out huge balls of fire.

“It was scary and I thought I was going to get burned, but it was definitely fun. Scary, but fun,” said Gloriani.

Starr continued to surprise the packed room by wandering the audience and collecting multiple girls’ rings to swallow. One of these girls, Cassandra Lewin, was also told jokingly by Starr that she too would have to swallow a fish along with him later on in the show.

“I didn’t know what to expect. I’m not going to lie, I was scared for my life,” she stated. “I don’t know if I would ever volunteer again, but it was definitely entertaining. The stuff he was doing was different and one-of-a-kind.”

As for Starr, shock value is something that sets him apart from other entertainment acts.

“I’m on my own and I have no competition, that’s the beauty of it. I do something that no one else can do,” he stated.