SonReal wraps up a good deal 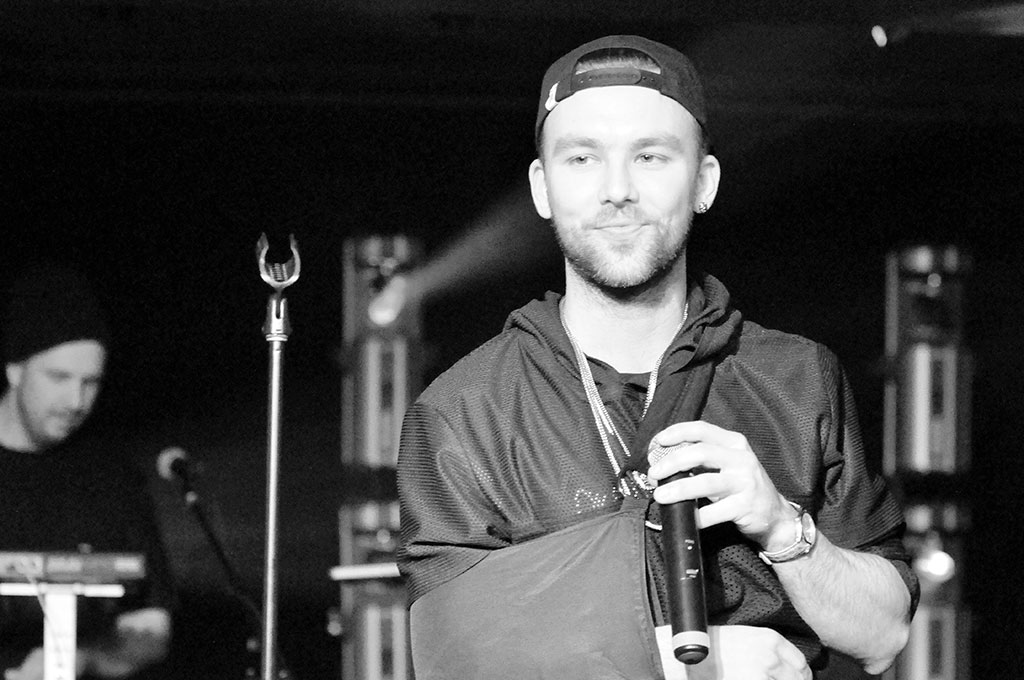 Despite his right arm being confined to a sling, Juno nominee for this year’s best rap recording, SonReal, performance at the Observatory on February 27gave testament to the B.C. rapper’s reputation as a dynamic and confident performer.

“I hurt myself about two weeks ago doing one of those weird arm things,” he said to the crowd at the outset of the show, raising and lowering his healthy arm in a mock dance performance. “And I can see each and every one of you right now so you better raise your hands up with me… Or it’s about to get real awkward.”

“Preforming with the sling has taught me a lot about myself onstage,” said the rapper in an interview before the show. “I’ve been workin’ on my live set like a motherfucker, I’ve learned how to better control the crowd.”

Whether he stood anchored to the microphone stand or bounced across the stage, SonReal captivated the audience with his passionate song delivery and funny banter in-between.

“I remember playing shows in coffee shops when I was first starting out,” he said. “And look at me now, here at this sold out show in Ottawa,” he joked to the modest turnout at the Observatory.

But the rapper’s style extends far beyond the comical, the songs in his set ranged from the fast and fun ‘Shit’s Epic’ to the inspiring and introspective ‘Believe’.

“My music is a representation of me as a person,” said SonReal in the interview. “I’m not a one emotion man, it reflects my personality and embodies who I am.”

“I think the fact that I sing and rap onstage adds a lot to my style and performances,” continued SonReal. “My music is imperfect, genuine, flawed and real – just like life.”

Jonathan Rogerson, 22, drove an hour from Brockville to see SonReal perform and had already purchased a second ticket to see the rapper again in on April 5 in Toronto.

“I discovered him a few months ago,” said Rogerson. “I saw his music video and thought ‘there’s a star’.  There’s a story in his music and I can relate to songs like ‘Believe’ about overcoming things that get you down.”

Rogerson got the opportunity to talk to SonReal before his show, an indication of SonReal’s dedication to his fans.

“I told him that I wanted to be an actor and would love to be in his music videos,” said Rogerson. “He really encouraged me to pursue and take classes to hone my skills. I was definitely inspired by what he said.”

SonReal’s passion for his music blasts clearly through his latest mixtape, One Long Day, released just over a month ago.

“It’s been crazy man,” said the artist. “One Long Day had more downloads in the first 48 hours than my other mixtapes had in a year.”

“I can’t even pick a favourite song off the album,” he continued. “I love the whole body of work. We recorded about 80 songs and cut it down to 11 that we’re really proud of.”

His effort has certainly paid off. With One Long Day earning a Juno nomination for best rap recording of the year, SonReal finds himself in the same category as Canadian artists Drake, Classified and Shad.

“It’s great to be recognized for all this work,” said the rapper. “We’re up against some big artists, just to be in the same category is fantastic.”

The humble rapper is also open to passing his experiences down to other up and comers.

Corey Charron, 22, an Ottawa native and Algonquin graduate of the introduction to music industry arts program who isknown for his skill at battle rapping, opened the show for SonReal on a day’s notice after already performing with the Juno-nominee at his recent stops in Ottawa and Montreal.

“He’s just such a real guy,” said Charron of SonReal in an interview with the Times. “I’ve learned a lot from him about live performance and how to really control a crowd.”

SonReal had nothing but praise for his young opening act.

“He’s obviously a crazy battle rapper but to see him making the transition to writing songs is dope,” said SonReal before the show. “I’ve got mad respect for him.”

“I think that we all need to find what we love and just work at it,” said SonReal. “People always told me to have a plan B, fuck that man. Be who you need to be, go do something. If you sacrifice and work hard enough you’re gonna get it.”