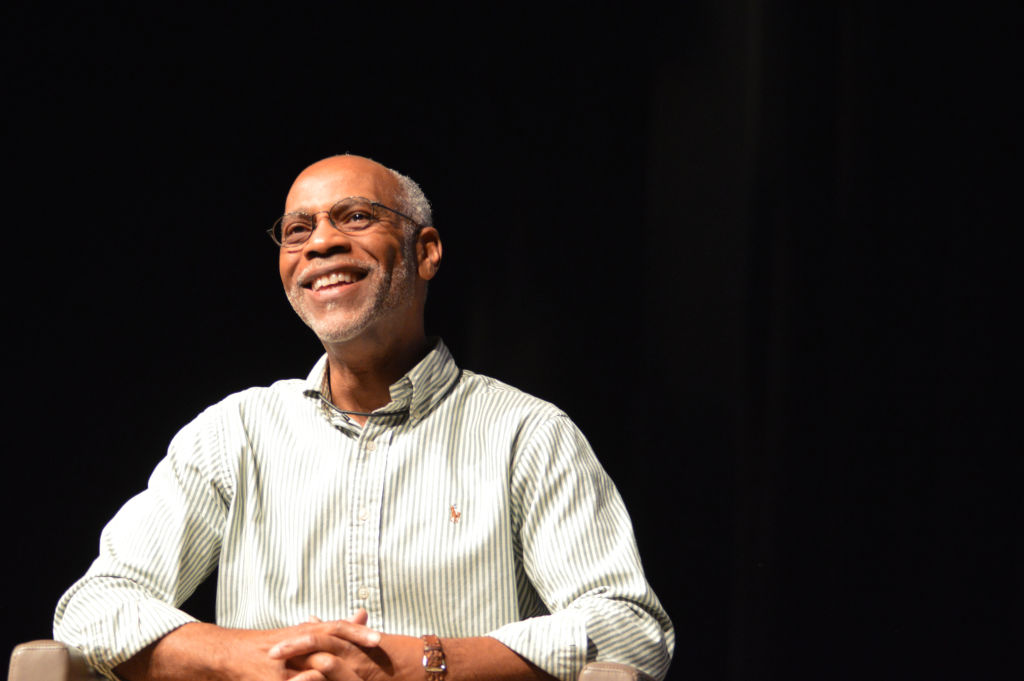 Standing on stage with sketches of Gaston from Beauty and the Beast projected onto the screen behind him, the Disney animator puffs up his chest and sticks out his chin, imitating the classic character.

The audience laughs, and the artist breathes easier as he returns to his calm, mild-mannered state.

It is Ron Husband, who worked at Disney for over 35 years, visiting the Commons Theatre on Oct. 1.

To share a message that was crucial to his success in animation.

“Artists need to draw more, it’s not a more complicated, serious message than that,” said Husband, in an interview with the Times. “They just need to get back to the basics.”

While appearing nervous as he started his show, Husband gradually relaxed as the crowd laughed at his funny cartoon characters projected on the screen behind him.

Eventually he ditched the script and talked the audience of over 200 students and faculty through his techniques behind animating some of his classic characters, such as Jafar from Aladdin and Djali from The Hunchback of Notre Dame.

“The animators are actors literally with a pencil,” said Husband. “Your character is acting out of emotions. Who is that character? What is he thinking? What forces are driving what they say and do? This is paramount as far as putting on an actual performance.”

During a question and answer period, students tripped over themselves to get to the microphone for a chance to speak to Husband. Many students spoke nervously as they gushed to someone who helped fuel their young imaginations through classic Disney animation.

“He animated all of my childhood and inspired everything,” said Sarah Knight, a pre-animation student, who was near tears of joy as she spoke to Husband. “I jumped at the chance to be able to see, talk and meet him.”

Still, others were simply there to learn from a veteran of the business.

“I came to glean as much information as possible from someone who knows what they’re doing,” said Vanessa Rowett, a second-year animation student.

But the fandom for Husband didn’t stop at the end of the show, as the entire audience formed a line outside of the Commons Theatre to be able to speak to Husband.

The show was put on by End Credits, a podcast run by Cory Tibbits and Myles Rourke. Their show focuses on people in the entertainment industry that work behind the scenes.

This was their second time bringing the show to Algonquin and based on the results and chatter after the show, it will not be their last.