Sheepdogs ahead of the herd 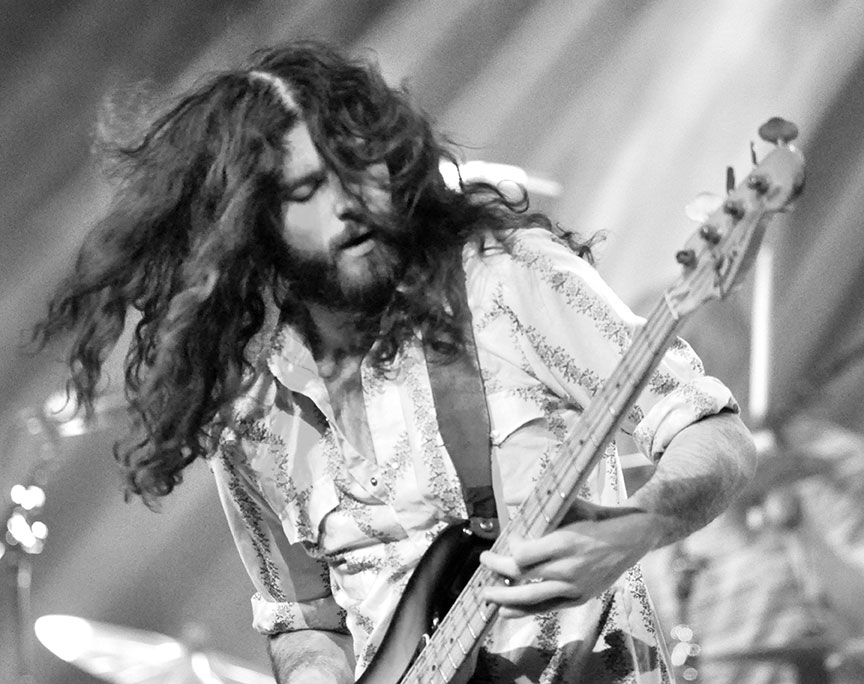 When the main act rolls on stage on an ice-cream cart, finishing their drinks from before the show, it may make the odd concert-goer concerned.

But there was no need for concern when Juno-winning, Saskatoon natives the Sheepdogs took the stage at the Algonquin Commons Theatre on March 14 .

The band, who had their previous show at Brock University on March 12 cancelled due to a snowstorm, seemed to use the extra energy in a rocking performance that had the crowd grooving, stomping, chanting and dancing.

“It was fucking awesome,” said Jack Giles, a University of Ottawa engineering student. “It’s my second time seeing them.”

She wasn’t alone in that sentiment, as the Sheepdogs kept fans on their feet from the start, playing hits like Right On, The One You Belong To, and Laid Back.

The night started off with a meet and greet with the band who strolled in with jeans, belt buckles, western shirts, long hair and beards, signing autographs for fans and chatting about their lives with them.

Leot Hanson, guitarist, mentioned his upcoming bar which he is currently a partner for a new bar that seeks to fill the void left by Lydia’s Pub, a Saskatoon establishment well-known for its live music, and where some bands, including the Sheepdogs, got their start.

“You’re not going to find anything modern there,” said Hanson with a laugh. “It has a 30-foot bar, 14 taps, and we’re hoping to just have mid-level indie bands roll through.”

During the performance, lead singer Ewan Currie spotted a sign in the crowd, made from an Old Style Pilsner beer case, a popular beer brewed in western Canada, and takes it on stage with the band. It says “Bring back Lydia’s”.

“I love that it’s on a Pilsner case,” Currie laughed before launching into some of the band’s more popular hits, I Don’t Get By, which had the crowd singing along to the chorus, and Learn and Burn, stretching it into a seven-minute jam session filled with synchronized guitar solos that had the crowd cheering uproariously.

“The sound that they have, you don’t really get that anymore,” said Travis McInnis, a co-op student who works with CKOJ and one of the lucky few who got to meet the band. “Good southern rock. I love it.”

The crowd loved it too, as they clapped along and cheered to The Way It Is before slowing down for Ewan’s Blues, a trombone-filled ode that had the crowd chanting the name of trombonist and keyboarder Shamus Currie as he switched positions with his brother Ewan, who took over the keyboard for the song.

“We’re not usually a band that does full introductions,” said Ewan after chants of “Shamus” filled the theatre, before proceeding to introduce the band members individually as chants of their own echoed throughout the theatre.

The band seemed to feed off this energy, propelling them into a high-energy performance of Catfish 2 Boogaloo, with both Gullen and Hanson coming to the very edge of the stage for some crunchy solos.

The band finished off its set list with their most popular song I Don’t Know, as the theatre rang with the voices of the band and crowd alike as both sang their hearts out, and How Late, How Long, a song from their latest album, self-titled The Sheepdogs.

I Don’t Know helped propel them to stardom after winning Rolling Stone’s “Choose the Cover” competition that had them beat 15 other acts to appear as the first unsigned band to make the prominent magazine’s cover.

As the band walked off the stage, cheers and chants for an encore filled the stadium, prompting a quick return from the band.

“I got to say, Ottawa is one of our favourite places to play,” said Ewan to the roars of the crowd, after assuring them that they do not in fact say that about every place they play.

“We got two more for you guys, thank you so much.”