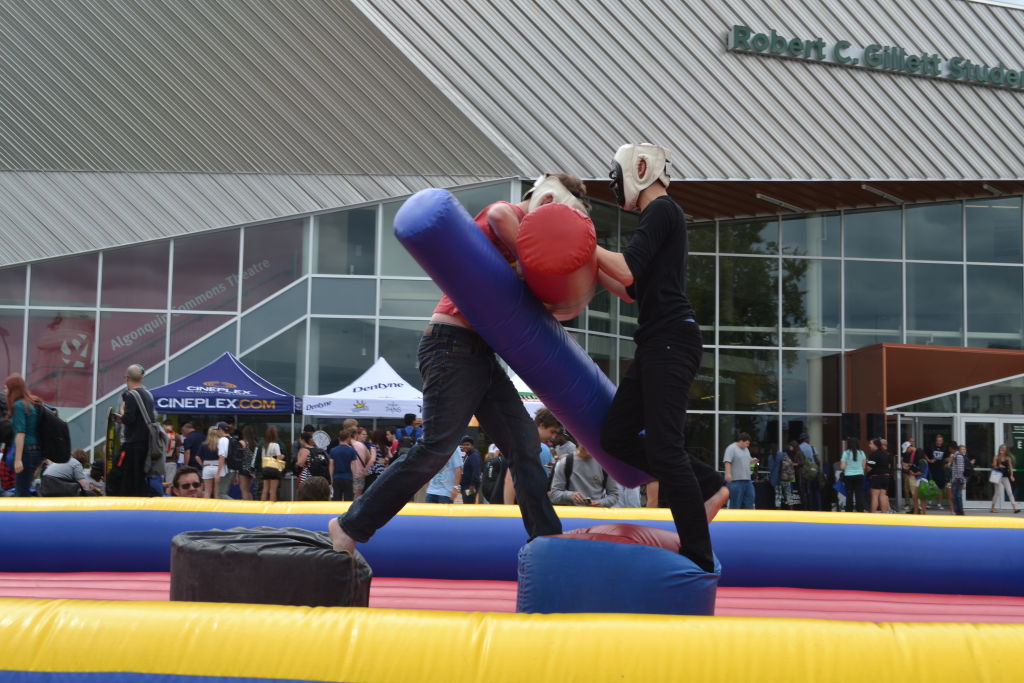 Two students fight with padded gear in the gladiator pit at the Student Association's carnival. This is the fourth year the SA has held the event.

Students returned to school and their childhood Sept. 10 as the Student’s Association (SA) hosted its annual campus carnival.

Laughter, tumbling, and shrieks of excitement filled the air on the grounds of the Student Commons. It was the fourth year Algonquin hosted the campus carnival in collaboration with Hard Entertainment, which brought in local and international sponsors for the event like Cineplex and Sony, among other things. Students and staff had the opportunity to conquer the rock climbing mountain, face off in duels, and compete in obstacle courses, among many other inflatable activities.

“It’s an awesome way to kill time on a three hour break and have fun with friends you haven’t seen in a while,” said Liz Jackson, advertising and marketing student.

The carnival allows students who tend to be submerged in their programs the opportunity to interact and engage in some college fun.

“The response from the event is great, it’s fun for students, and cost effective, all the reasons to keep doing it,” said Bill Kitchen, Student’s Association event coordinator.

A question that kept coming up from students throughout the day was; why not have more activities like this at the college? Although the SA can’t do the same scale event as the carnival due to the fact that “we live in Canada so there’s certain climate challenges,” they did do a similar event last year where they stuck a couple of inflatable games in the Student Commons for a day.

“We’ll probably do something like that again to break up the winter blues,” said Kitchen.