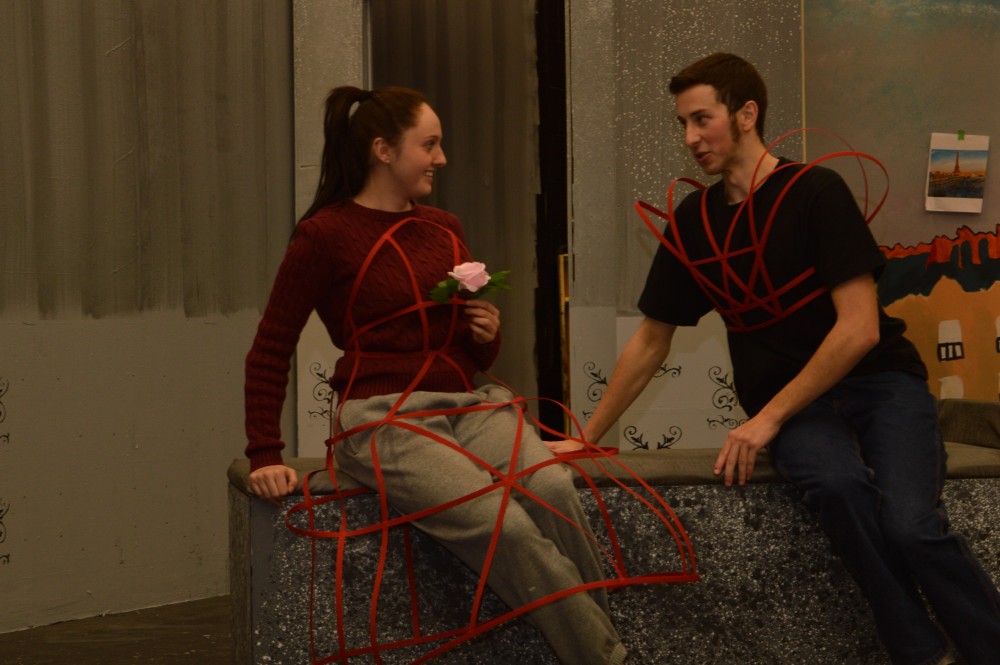 Theatre arts students from the left Sasha Laing and Ryan Young try their hands at seduction while rehearsing a scene from the comedy The School for Lies. The play runs from Feb. 11 to 15.

Just in time for Valentine’s Day comes a play filled with lying, jealousy and flying canapés.

Second-year theatre arts students present The School For Lies from Feb. 11 to 15, a comedy about people who lie to save their social status.

Sasha Laing plays Célimene, a rich widow who loves making fun of people. She hangs out with three suitors who she keeps around solely for their power.

Their world is turned upside down when Frank, an advocate for honesty, arrives on the scene. Frank, played by Ryan Young, ends up falling in love with Célimene against his better judgement.

Adapted by David Ives from Molière’s 1666 play The Misanthrope, the actors use modern language like “yo” and “dude.” Laing even has a rap segment in which she channels Eminem.

The actors may speak in rhyming verse, but it doesn’t sound anything like the childish lines of Dr. Seuss.

“Moliere has a lot more dirty jokes than I thought you could fit in a play,” said second-year theatre arts student Nelson McCulloch.

For some students, like Justin Dickerson, it was their first time acting in a full-length play. The class also built the props and set.

“It’s great how the kids do all the work,” said theatre arts professor Teri Loretto-Valentik.

After hours of rehearsal the play is starting to leak into the actors’ off-stage lives.

“It’s just fun on a bun,” said McCulloch. “There’s humour for everyone.”