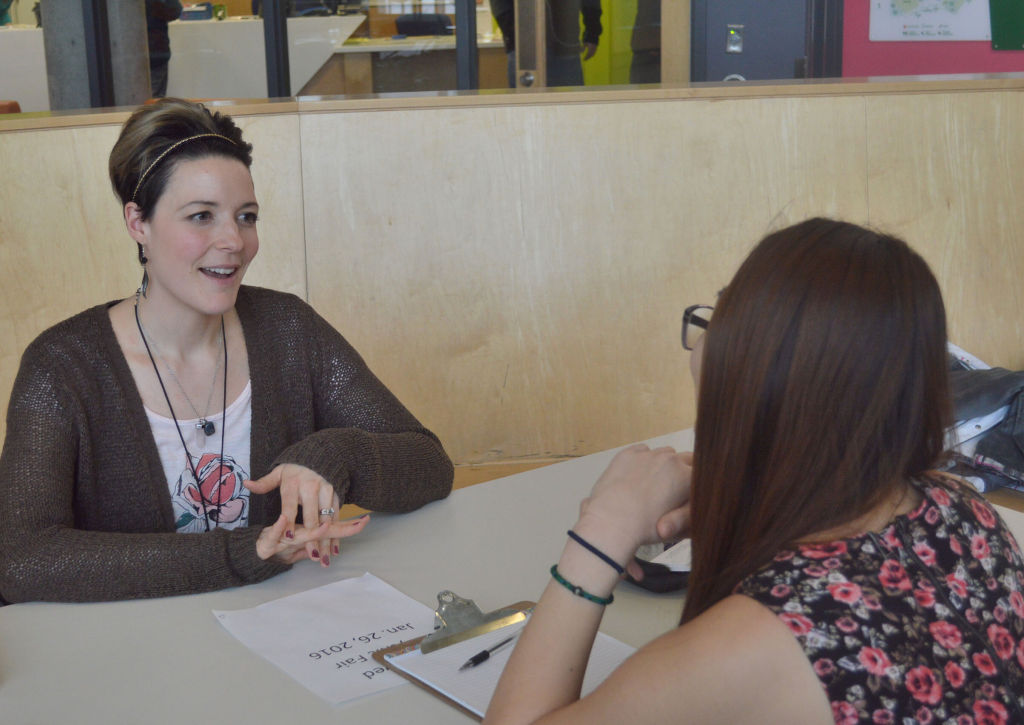 Jennifer Hall, a medium, gives Kendra Thompson a guidance reading. Hall was one of four psychics who appeared at the Psychic Fair, which took place in Student Commons on Jan. 26.

The Psychic Fair drew in a diverse group of participants to the Student Commons on Jan. 26.

The free event, which was organized by the Students’ Association, began at noon and lasted for two hours.

The fair featured four psychics. Three of them sat by their booths as they shared their spiritual skills.

Steven Robert Morrison, a psychic from Ottawa Divination, did not have a booth at the fair. Instead, he approached participants as they waited in line. Morrison used the participants’ facial features to explain details about their personality and spirit. The accuracy of his readings received mixed reactions from attendees.

“He said that I was kind of a Barbie, which I thought was funny ‘cause I’ve never considered myself to be that,” said Christine Hager.

“His reading was a little more accurate for me,” said Liam McLeese. “He picked up that I might have a lot of ideas, but I might not execute them properly.”

The event drew in both believers and non-believers of psychic abilities, but regardless of popular belief, the event was appealing enough to draw in a large crowd.

“It’s like when you read your horoscope,” said McLeese. “You pick out what makes more sense to you.”

Three long lines filled the Student Commons building as participants waited for the chance to talk one-on-one with the psychics that had booths. Each line consistently held between 25-40 people throughout the event.

Each psychic was unique in their own right. One booth belonged to Dan Valkos, a pyschic entertainer who offered participants answers to three questions each about the future. Jennifer Hall, a psychic medium, offered either spiritual guidance or contact with the dead to each participant. Michele McGrath, a tarot card reader, held the longest line for the entire event.

Sieglinde Altenbroxter, a second-year travel and tourism student, was impressed by Hall, the medium. “She asked me if I was visiting my boyfriend this weekend,” Altenbroxter said. “I never told her anything, but I totally was visiting him this weekend. That was crazy to me.”