Play highlights life on the edge 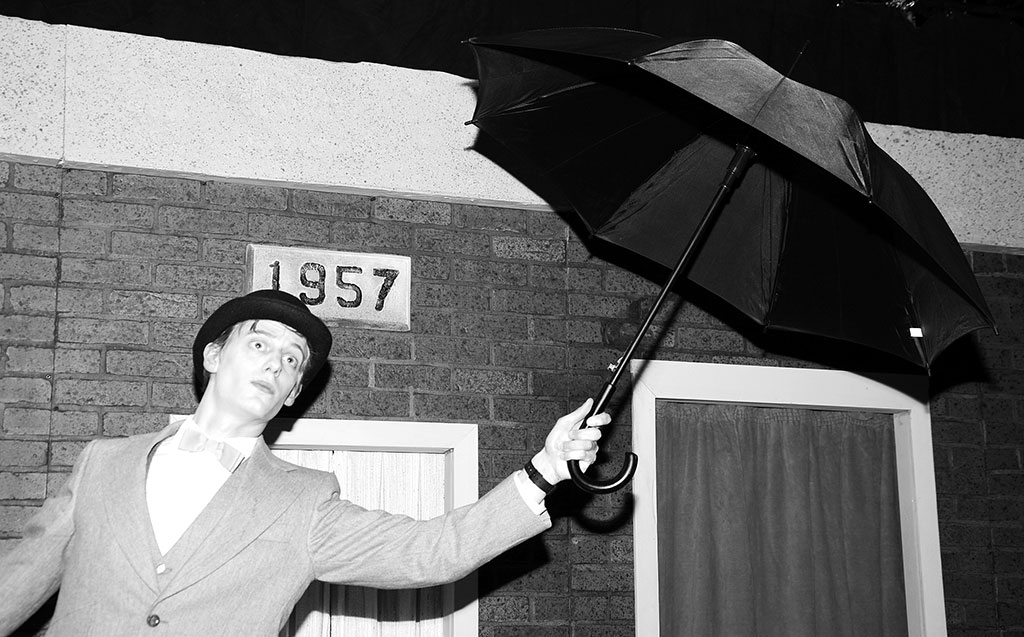 Second-year theatre arts student, David Hania, stands in his closing pose of the play. The costume was designed by Vanessa Imeson. The set design was done by David Magladry.

An old woman who knows too much and her callous caretaker. A psychiatrist missing a marble or two. Some partiers with different personalities. A couple with a dark twist. A man on the edge.

If you think those characters sound like the introduction of a joke, you’re almost right.

On the evening of Feb. 12-16, second-year theatre arts student David Hania spent his time as the Man, the protagonist of 7 Stories. During his time on stage he interacted with a cast of ‘crazy’ characters. Throughout this time, the Man contemplated his life on the ledge of an apartment complex.

“This play’s been produced a lot since its production by Canadian playwright Morris Panych over 20 years ago,” said Ellis. “The principle is the same with the man on the apartment ledge seven stories up with people in seven windows. Every production has to do that but I was going for the kind of theatricality of it. I wanted to push the absurdity for the comedy and not so much purely naturalistic or realistic.”

The theatre arts students proved successful at including the absurdity in 7 Stories and the audience shared in the success with every character’s ‘crazy’ story.

First up on the list of crazy stories came from the murderous couple, Charlotte and Rodney, who popped out of their respective window with Charlotte screaming bloody murder. Of course, this only continued until they noticed the Man was standing there. Rodney then retreated to make a drink while Charlotte told the Man their story.

One by one, characters poked their heads out of the windows, sometimes more than one at a time. And one by one they told the Man their stories.

“I really liked it,” said scriptwriting student Ashley Newton. “I was always excited to see what would come out of the next window.”

7 Stories was chosen due to the interesting challenge it would pose for the students by having them take on multiple roles. It was also a challenge for Hania, whose character was first on the stage and only left when the figurative curtains fell.

“It was a big challenge to build up the energy and flow of having a new character coming out because I had just gotten over hearing one crazy story and suddenly someone else pops out and gives me something completely new and crazy too,” said Hania. “It was a huge learning experience for me and my biggest role to date. Everyone has something to be proud of.”

These plays are a requirement for the second-year students in the theatre arts program. The students are required to act for one of the plays and take on the role for crew-work such as lighting, sound, or set design to earn first-hand experience for future careers.

“It’s all done for marks and the experience,” said producer and part-time theatre arts teacher Teri Loretto. “We judge them on all the things they would be judged on in a professional setting like on their attitude, professionalism, and final performance as well.”

When the play had ended and the actors all came out to thank the audience for coming, the smiles on their faces made it clear they were happy with the fruits of their labour.

Hania’s role was difficult due to his constant switching of his attention from one whacky character to the next but he managed to pull it off and the audience laughed with each every lightly-veiled joke.

“Frankenstein is a big job because the set will be very minimal and it’ll depend a lot on the lighting to set the stage,” said Hania.