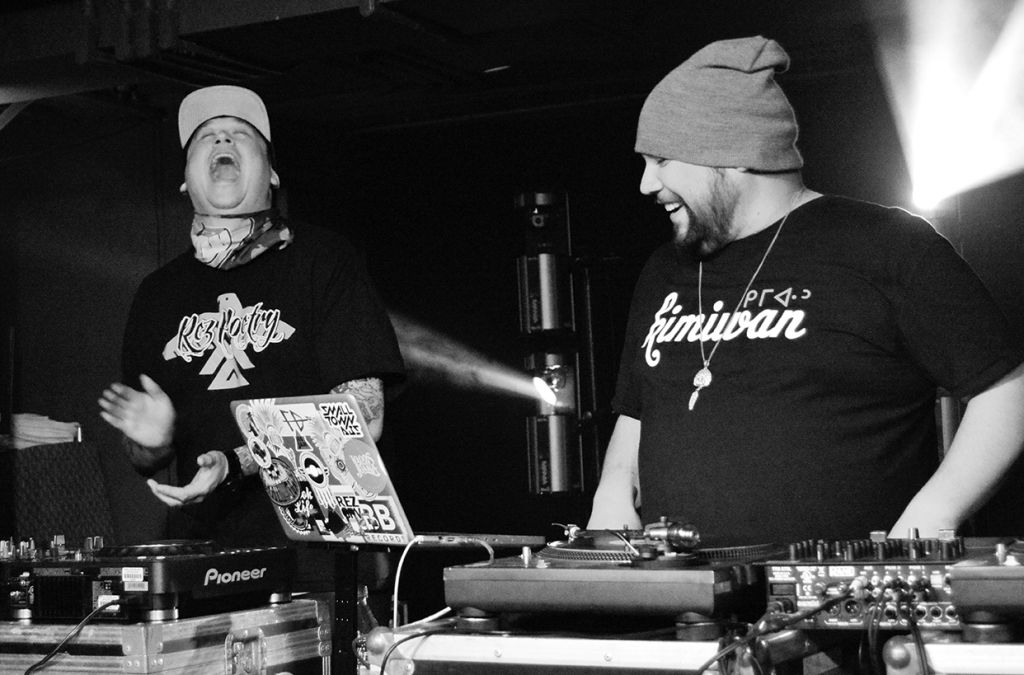 There were scenes playing on the screens around the bar as they played through tracks like Electric Pow Wow Drum, Sisters, and Bread and Cheese. Looped scenes of Native imagery in film and TV, like white actors playing Native roles in old westerns, played alongside them. There were cartoon space Natives shooting laser guns in time to the band’s sound effects, and Eazy-E, from old-school rap group N.W.A., bobbing his head in a music video clip.

There were sound bites from comedian Louis CK, as well as from Brad Pitt in his role in Inglorious Bastards mixed into their songs.

There was even a red-shirted gentleman who’d punctuate every drop with a shrill war cry.

They played to a crowd of all ages, shapes, and sizes, showing that even though their music is heavily influenced by traditional Aboriginal music and culture, it has been able to further than cultural boundaries and gather fans from all over.

The evidence was on the dance floor, as it was alive with all kinds of people, from the average concert goer in normal clothes, to the shorts and tanks favoured by the hard-core ravers, to the slightly more formal tucked-in button up. There was one woman dancing by herself, looking as if she got lost on her way to Woodstock, while another—the aforementioned fellow in the button up—was doing something that looked vaguely similar to “the twist”.

“It was awesome,” said Cory Hilliard, computer science student. “I saw the advertisement, and since I’ve known about them and am into electronic, it jumped out at me.”

The band is known for their unique mix of traditional-sounding Aboriginal music with new-age electro beats.

Although they have come far since their beginning in 2007, and frequent big stages across the world, they haven’t forgotten their roots, rocking the Ob in the same manner that make their Electric Pow Wow events at Babylon Nightclub so popular.

“There were tons of culturally-specific parties going on—the Korean parties, the Jamaican parties…so we wanted to throw a party that was geared towards, but not limited to, Aboriginal people here in Ottawa,” said DJ NDN. “So we ended up flyering at Aboriginal student centres and it became like this huge success, a big overwhelming success.”

Those early monthly events helped form the band as it is today, as in 2009 it attracted Dan “DJ Shub” General, Mohawk, who came from the Niagara region.

DJ Shub had come to Ottawa for Aboriginal Day and, already being an accomplished DJ, was asked to showcase at one of the Electric Pow Wows.

“He told us later that he was completely blown away by how many Aboriginal people there were,” said DJ NDN.

DJ Shub’s involvement led to the birth of one of their most popular tracks, Electric Pow Wow Drum.

“Dan produced that. He heard me and Bear mashing up powwow music, and he was living in Fort Erie at the time,” recalled DJ NDN. “And he went back after an Electric Powwow–after hearing what we were doing–and sent us Electric Pow Wow Drum and said, ‘Hey, what do you guys think of this?’”

They asked him to join.

Since then, the band has been making strides in the Canadian and world-wide music scenes.  Certainly, ATCR’s sound is something not normally found on the mainstream Top 40, but that’s looking like it may soon change.

The group has been nominated for the second year in a row for a Polaris award, as well as two Juno nominations, one for Breakthrough Album of the Year, and another for Electronic Album of the Year, both for their album Nations II Nations.

“We made the short list (for the Polaris award) last year, and the year before that we made the long list, so it was our second time being on that list,” said DJ NDN. “It’s overwhelming. We’ve been doing this since 2007 and last year was the first time we were nominated for any sort of award.”

The recognition can be welcoming to a group like ATCR, especially when their music is so different from most other groups out there.

“We’re not like all other DJ crews,” explained DJ NDN. “Most DJ crews may have three DJs but all huddled around one computer or one setup. We all have our own set-ups, and we’re playing off each other and playing into each other’s songs and out of each other’s songs and I think it comes from all of us being DJs before we started producing anything. So we operate more like a band when we’re on stage, coordinating our set to each other’s playing. Everything we’re doing is live.”

But the rewards don’t come without their sacrifices, as the band spent nine of 12 months in 2013 on the road. This year is looking to be slightly less busy, but with an April schedule that includes tour dates in Winnipeg, Portland, Ottawa, France, and New Orleans, among others, it’s looking to be another hectic year for ATCR.

“I don’t think we’re stopping until September,” said DJ NDN. “And even then I think we’re touring through September too.”

While it can be hard to spend so much time on the road, DJ NDN credits his family for their support.

“Family is the reason I’m doing all this. I wouldn’t be able to tour as much as I am without their support.”