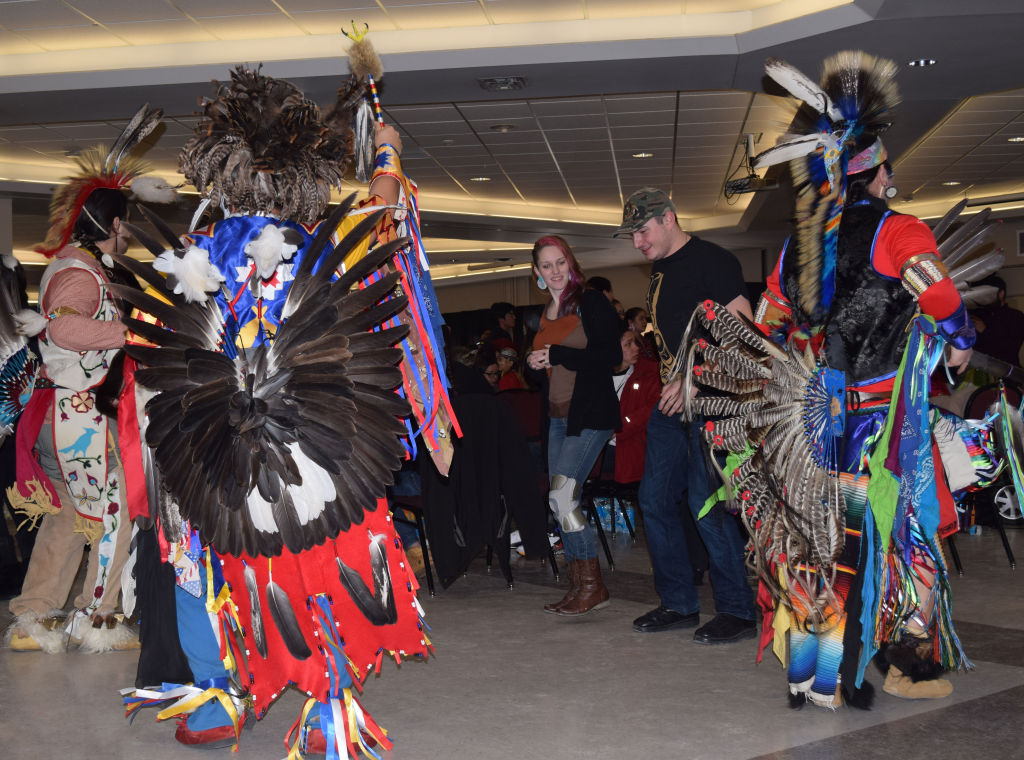 First Nations men and women in special regalia lead the dance and ceremonies on Jan. 29. It was the third powwow at the college.

The Mamidosewin Centre hosted its third annual powwow in the D-building cafeteria on Jan. 29.

This powwow was traditional in the sense that it followed a rigid schedule. Singing, dancing and a blanket ceremony were among the main attractions.

Several First Nations’ men and women were outfitted in special regalia to lead the dancing and the ceremonies.

Volunteers handed out instructional pamphlets and were available to answer any and all questions the attendees might have had.

“I was actually here in this exact same spot last year. I was a student at Ottawa U and I didn’t really know anyone, especially anyone who was themselves first nations,” said Tony Vanhooser a Mohawk First Nations from Tyendeneaga, who is currently employed with the Mamidosewin Centre. “Then after the pow wow, my circle had completely blossomed, I suddenly knew all of these different people from all sorts of different nations.”

While powwows are traditionally a social gathering and typically don’t serve any particular utility, the annual powwow hosted by the Mamidosewin Centre is the centre’s attempt to reach out to any First Nations students who may not be aware of the Aboriginal representation at the college.

“The Mamidosewin Centre is amazing, it’s a large community filled with the nicest people you’ll ever meet and really that is the point of events like these,” said Vanhooser. “To let people know that there is a great aboriginal presence at the college, that the partnership between the school and the aboriginal staff and students is strong and respectful.”

Any and all were welcomed to participate or spectate. Powwows are ultimately a tool to bring together First Nations people and educate others about the rich culture.

“You can feel the energy and excitement from the performers. It seems really fun, like a great way to get people together.”