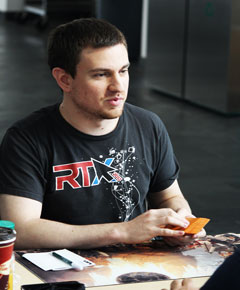 Steven Dunkelman, tournament participant, plays in the Algonquin Magic Grand Prix Trial. The first place winner took home a two round bye to the Grand Prix Toronto, a weekend long tournament at the end of November with prizes of up to $3,500.

Heroes, monsters and spells from old legends, plus some dice, cards and a chance to bypass two rounds in a huge tournament in Toronto: maybe not a battle between good and evil from myths and legends, but the stakes were high enough for the players that gathered on the second-floor of the ACCE building on Nov. 2 for a Magic the Gathering tournament.

Hosted by the New Technology Store, Algonquin was home to a Grand Prix Trial and saw the first-place winner take home a two-round bye in the upcoming Grand Prix Toronto, allowing them to bypass the first two rounds of the event. This was in addition to a number of other prizes, including numerous packs of cards, handed out to competitors.

Grand Prix Trials are feeder tournaments to the larger Grand Prix tournaments, weekend long events that can qualify players for the Magic pro tour. The event hosted by Algonquin fed directly into the Grand Prix Toronto, which is being held at the end of the month.

“Magic runs upwards of 40 Grand Prixs a year. These Grand Prixs are open to anyone who wants to come,” said Christopher McGuire, a level two judge, responsible for overseeing larger Magic events such as this. “They do qualify people for the pro tour, so it is a step that people can take to get onto the professional Magic pro tour.”

The tournament hosted at Algonquin is a big step for the New Technology Store in hosting Magic-related events and is a sign of its ability to draw in new players and of a growing presence of the game in the city, with a Grand Prix Ottawa now announced for next November.

“Ottawa’s finally starting to get a few of these. There was only one store that was running GPTs and it’s really good that Algonquin’s starting to do that,” said Andrea Bruce, a graduate of Algonquin’s animation for television program. “It’s the first step into getting a PTQ, a pro tour qualifier, or get Ottawa to get more of those.”

While this event has been a big step, it’s clear it’s not the end and the new Grand Prix next year has become another target for the store.