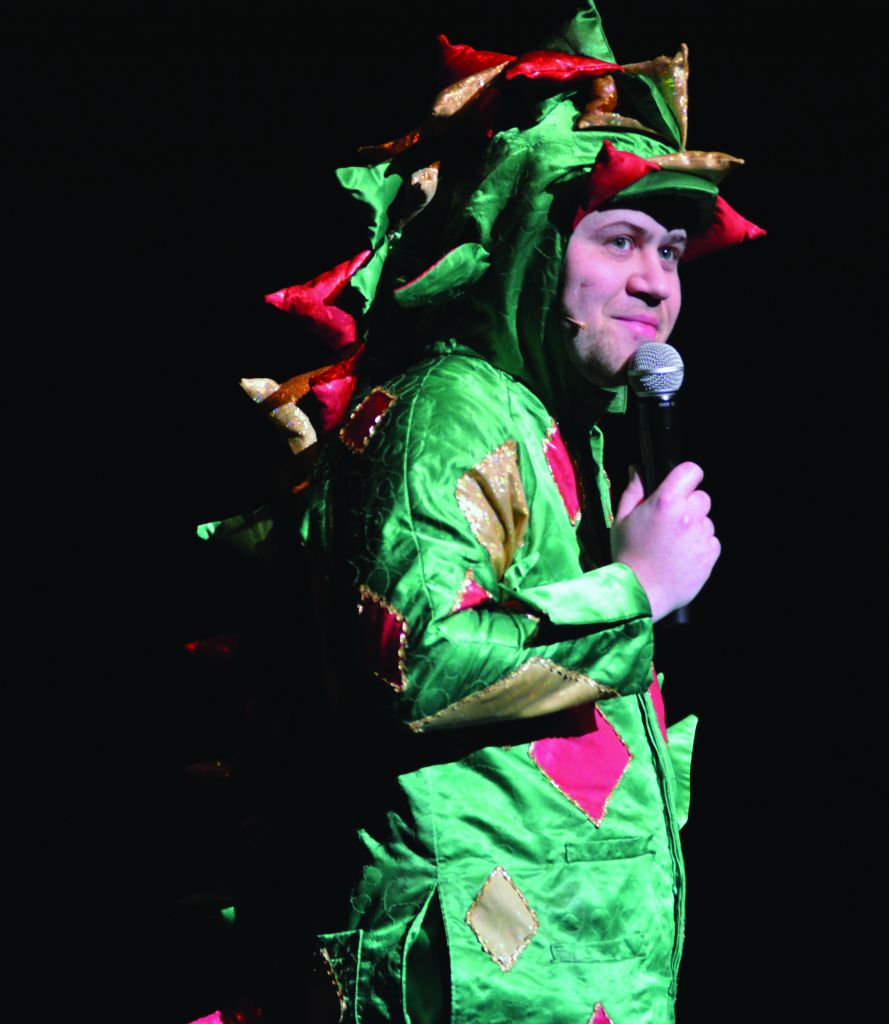 Piff the Magic Dragon picks up a toaster, places two pieces of bread in it and begins blowing on the appliance.

“I’m going to warm up the bread using my natural dragon fire,” he says, then pauses as he pushes the bread down in the toaster. “Dragon fire takes about three minutes.”

He proceeds to place the toaster down onstage, audience members laughing aloud, and begins executing a card trick in which the toast pops up and displays the card of an assistant he brought onstage.

It was one of many magic moments when comedic magician Piff the Magic Dragon and his Chihuahua, Mr. Piffles, brought his show to a packed audience at the Algonquin Commons Theatre on March 9.

“Everything I touch turns to magic,” he says, with a nonchalant look about his face.

The dragon and his pup, along with Las Vegas showgirl Jade Simone and Piff’s squire named Francis, had audience members laughing throughout the evening. Executing mostly card tricks, Piff pulled members of the crowd onstage and incorporated them in his act.

“He was very interactive with the audience which was really nice,” said Sarah Ardito, an alumnus from Algonquin’s paralegal program.

Although Piff has been to Canada before, it was the first time he and his crew visited Ottawa.

“I loved the beavertails,” he told the Times. “We’ve had poutine before, but it was the first time we had beavertails.”

Even Mr. Piffles was excited to be in Ottawa.

“Piffles made some yellow snow.”

After the magic dragon’s performance in Ottawa, he was on his way to Niagara, then New York, then back to Las Vegas, where he performs his permanent gig.

“We’re basically on tour all the time, half the time in Vegas and half the time on the road,” he told the Times. “We’ve been doing that since America’s Got Talent.”

Piff made it to the top 10 on last year’s season of America’s Got Talent. During his performance at Algonquin, he joked about his loss in the competition.

“You don’t have to end everything in life with success,” said Piff, during his final act of the night, where he failed to predict an audience member’s card.

But his loss in the competition didn’t matter to audience members who came for a laugh.

“I watched America’s Got Talent the whole time through,” said Melanie Fournier, a mother who mentioned that her children were jealous of her opportunity to see Piff. Her friend, Krystin Rodgers added that she was also a fan since day one.

“He’s funny as hell,” said Rodgers. “I love his sarcasm.”

Medical device reprocessing student Brandon Armstrong became a fan of Piff due to his appearance on Penn & Teller, a comedy duo who have been performing together since the late ‘70s.

“I fell in love with his act,” said Armstrong. “It’s absolute hilarity.”