High times in the Commons 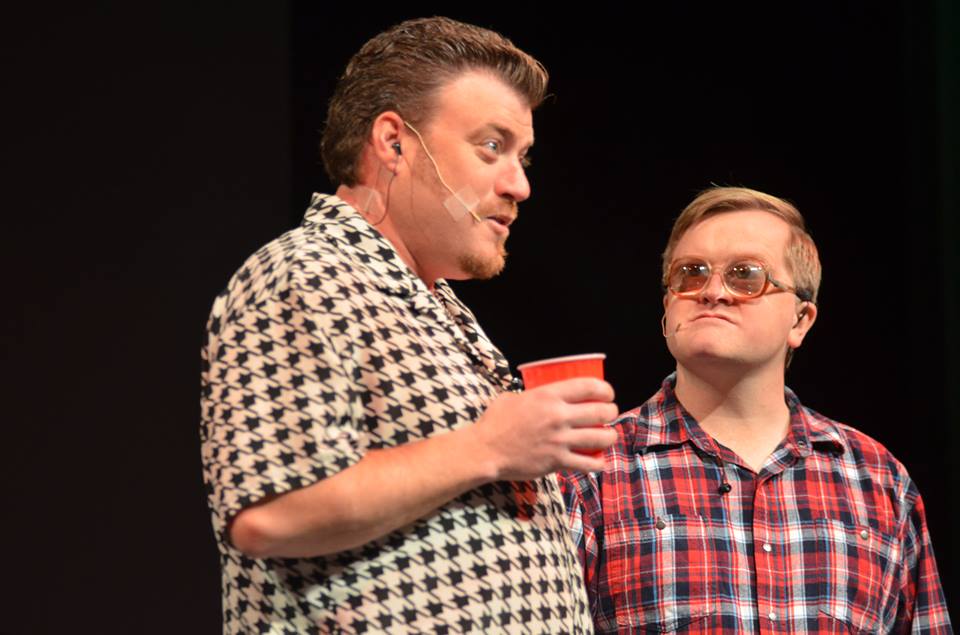 Audience members at the Commons Theatre broke into hysterics on Nov. 28 as Jim Lahey, dressed as an intoxicated Santa Claus, promised to show the “little shit weasel” sharing the stage with him “a thing or two about Christmas.”

The cast of Trailer Park Boys – Bubbles, Randy, Lahey, Julian and Ricky – stepped out of the trailer park and onto the Commons stage to entertain students and fans from as far as New Brunswick.

“I’ve been a fan since I was younger, back in elementary school watching the show,” said Roberts.

“My brother has seen them a few times and said they were awesome so I couldn’t pass up the opportunity, and right at Algonquin, too.”

Trailer Park Boys first debuted on the Showcase television network in early 2001 and has since risen to national and international fame.

The Canadian mockumentary series chronicles the exploits of a group of trailer park residents in Dartmouth, N.S. The characters are ex-convicts and grow operators who live in trailers, sheds and at times even a car.

Each episode follows Ricky, Julian, Bubbles and other accomplices who engage in petty crime in order to make money and stay out of prison.

Other characters include the trailer park’s supervising officer, Jim Lahey, and his trusty partner-in-crime, Randy. Lahey portrays a bitter alcoholic and wannabe cop who devotes himself to seeing the boys behind bars.

Their current Christmas tour entitled Dear Santa Claus, GO F#CK YOURSELF is touring in Canada and the United States from Nov. 27 to Dec. 14.

The show, however, first began as a short film at the Atlantic Film Festival in 1999 where writer and director Mike Clattenburg first screened the initial concept.

The screening immediately caught the attention of Barrie Dunn, a film producer from CBC, who saw potential for a successful television series. Dunn is most famously known for his portrayal as Ray, Ricky’s deadbeat father on the show.

The show has since produced seven seasons on Showcase television and an eighth season on their own network, SwearNet.com.

The boys have also produced two movies with a third film entitled Trailer Park Boys: Don’t Legalize It scheduled for release in April 2014.

Guests on the show have included Canadian country singer Rita MacNeil and the late Denny Doherty from American folk band The Mamas and the Papas.

When the boys performed at the college, the show sold out within just a few days.

Although most of the events at the Commons Theatre are organized by the Students’ Association, a third-party production agency oversaw the venue location and management.

Dennis Ruffo Productions organized the show and has produced many others in the city including Great Big Sea, Bonnie Raitt and ZZ Top who played at the National Arts Centre on Nov. 8.

According to concert promoter Dennis Ruffo, Trailer Park Boys had the potential for at least two other shows in the Ottawa area.

“The show sold out very quickly and it’s only a 700-seat theatre,” said Ruffo.

“We probably could have done two shows, maybe three because it sold out that quickly.”

The show began with Lahey threatening to arrest members of the audience, drinking endless amounts of Captain Morgan rum and chasing around his shirtless side-kick, Randy.

Some of questions posed to the audience include Christmas classics such as: is there, or is there not, a Santa Jesus God? And, does Santa Claus really exist, or is it something that stupid people believe in?

Bubbles, played by Canadian born actor Mike Smith, is perhaps the most popular character on the series because of his thick maritime accent and magnified “bubble” glasses.

The audience whistled and hollered as Bubbles played Silent Night, Closer to the Heart and fan favourite Liquor and Whores on his acoustic guitar.

Being fans of the show since its initial debut, Serge Leanard and Sylvain Ouellettle travelled from Buckingham, Que. to watch the boys perform live for the first time.

For both, the show reaches much closer to home than any typical family-oriented programming.

“I liked the show very much because it reflects a couple of people I know that are quite like Ricky, Julian and Bubbles,” said Leanard.

“We’re from Buckingham, on the Quebec side, so it’s also kind of redneck. We do what Ricky do – we pass by and we try to live.”

Ouellettle also agreed that the characters on Trailer Park Boys reflect a certain socio-economic class in Canada, which is perhaps why the show has been so successful.

“It reminds me of my family kind of thing,” said Ouellettle.

“They’re kind of like my cousins – I feel related to them.”

The show concluded with a raffle to win backstage passes – an opportunity most audience members were anxious to win.

“It’s so weird seeing them so close,” said Oosterveld.

Fans were even spotted wearing Sunnyvale Trailer Park jerseys purchased in the Commons lobby for $75, a price equal to the cost of a ticket.