Craft beer is the new wine 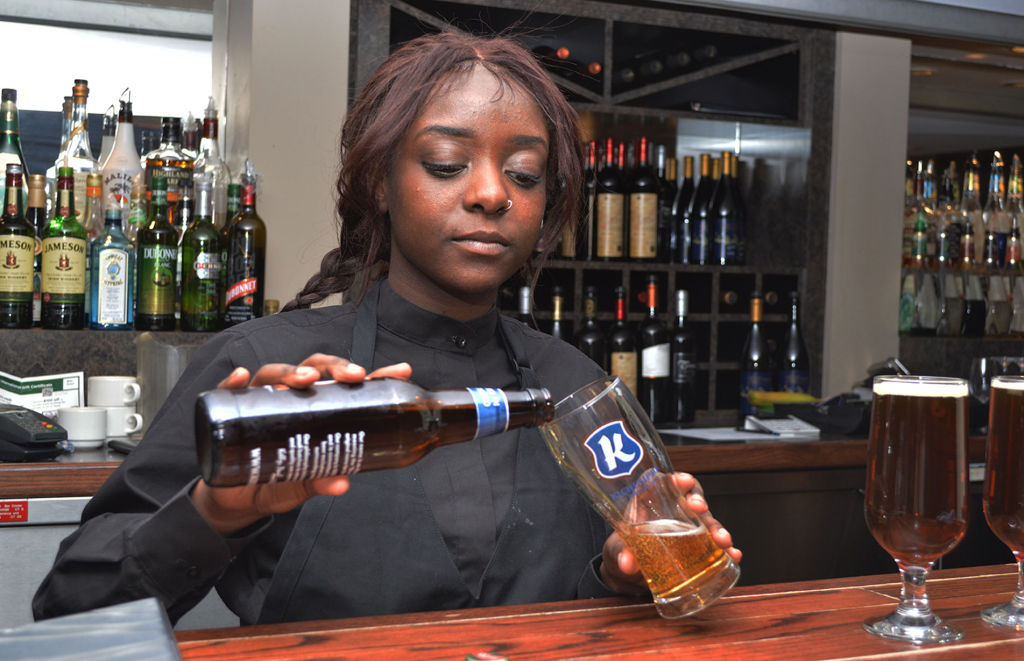 Third-year bachelor of hospitality and tourism student Rakiya Stephenson pours one of the featured craft beers for a guest at the craft beer and food pairing event.

Ontario alone has more than 35 licensed craft brewers from the Ottawa Valley to Waterloo, according to Ontario Business Report.

It would only seem natural for four Ottawa-based brewers to collaborate with Algonquin’s hospitality and culinary team to bring on the second annual craft beer and food-pairing event at Restaurant International Nov. 6.

The sold-out event featured brews from Big Rig, Beyond The Pale, Beau’s and Kichesippi.

Eight different dishes were served to each guest with eight different beers in small portions to allow them a chance to have a little bit of everything.

Each dish and beer came with a short explanation from each of the brewers who created them, making the tasting process that much more personal.

“The idea is to pair the beer with one dish, but hopefully try it with another dish to see what pairings work best and which ones don’t,” said Geoff Skeggs, instructor at the School of Hospitality and Tourism and creator of the beer course at Algonquin.
“The items (we paired) weren’t terribly similar,” said Dan Halden, chef and professor of culinary arts at the college.

“In the end you’re never sure how the flavoring and seasoning is going to be because the students are doing it, but it offers an interesting situation.”

Various beers ranging from licorice-like dubbel to caramel scotch brown ales were featured at the event with several interesting food options including curry lamb, duck, shrimp tempura, sushi and gumbo all prepared by the culinary students at the college.

Among the interesting combinations were beer and dessert pairings such as an oatmeal stout with chocolate cake.

“We made suggestions and then Geoff did some research on our offerings and then selected what he thought would be most appropriate based on what he knew chef was going to be creating for tonight’s food,” said Matt O’Hara, Beau’s master brewer.

Many of the beers featured that were bottled the day of the event are not readily available in stores yet and were made in small batches, many of which end up at Restaurant International.

“When I first came (to the college) that’s when we discussed that we didn’t want any brand name beers,” said Cathy Dewar, technologist and manager at Restaurant International.

“We stuck with it and said ‘no, we’re only carrying micro-brewers,’ and now everyone has bought into it… Beer is doing the same thing wine is doing now.”
Dewar suggests the popularity of craft beer has to do with its simplicity and appeal to younger adults.

“There is a microbrewery culture that has gone through a huge explosion in Ottawa,” said James Waller, manager at Restaurant International.

Restaurant International will be hosting more events such as this one and experiment to bring new and interesting events in the future.