Costumes in the Commons 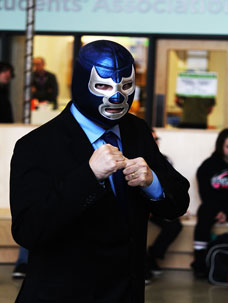 The Student Commons took a festive and spooky turn on Oct. 31 with not one, but two costume contests taking to the floor for a number of prizes.

Both the Students’ Association and the advertising students working on Glue magazine set up tables where costumed students showed off their outfits.

“There’s quite a lot of costumes, more than I expected,” said Sarah McKenna, a first year event management student and a member of the SA promo team. “I’d say there’s actually quite a bit of Halloween spirit in the school.”

For the SA contest, the prizes included $100 for the first prize winner, $50 for second place, and $25 for third. Winners were chosen by voters on Facebook after the photos of the top 10 entries were posted to the SA’s Facebook page.

For the Glue contest, the top ranked costume would win six pizzas from the Mr. Mozzarella chain of restaurants. The second place costume was awarded four pizzas and third place won two pizzas, in addition to a number of magazines, candies and other prizes for participation.

“If we see like a really great, thought-out costume we’ll give them a free pizza right on the spot,” said Lacey McNulty, a second-year advertising student working with Glue.

The Glue competition’s winners will be decided in a meeting by the advertising students working on the magazine later in the week.

“It’ll be a tough time judging all the costumes for sure,” said McNulty.

Both tables drew in a large crowd of students, many stopping at one table before moving on to the next contest. The staff at both tables also seemed to be enjoying themselves and actively encouraged passing students in costume to get their photo taken for the contest.

“It’s been more than we expected,” said Alija Jakupovica, a second-year advertising and marketing student at the Glue table. “It’s going really great and it’s just a lot of fun so we’re having fun doing it and really getting the name of Glue out there.”

There was a definite cheer around the tables and a feeling of Halloween spirit as other students took notice of the costumes and asked for photographs as well. Candy was handed out, people excitedly chattered about costumes they saw and everyone seemed to just be having fun.

“To actually see students and interact with them, to actually see the way they dress up and actually put it on for Algonquin, that’s a pretty good feeling,” said Gideon Bulwani, a first-year marketing student and a part of the SA promotion team. “To me as a person who works here, I get to interact with so many different people, get to know so many people and I think that for me that’s the best part, getting to see students putting in effort for a good cause, even just to have fun.”