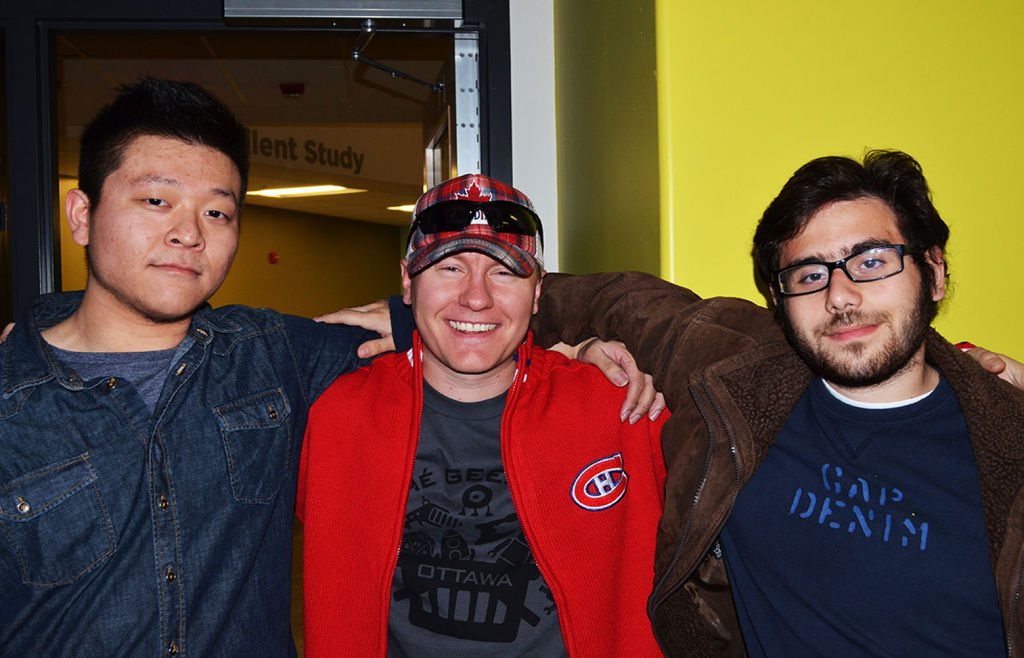 Dennis Kao, Jim Woolley and David Tsoukalis all attend the competitive gaming club. They, like the rest of the group, want to help bring in more members by expanding the amount of games.

Meeting once a week every Thursday afternoon, the Algonquin competitive gaming club hopes to bring both casual and hardcore gamers together. The most important thing that everyone in the club stresses is to not be shy and have fun.

Justin Ray, an electrical engineering student and member of the competitive gaming club, has only recently started attending but plans to continue going.

Office administration student Alexandre Vien-foulkes also just started attending the club. However, unlike the others, he found a significant problem.

“We need more girls,” said Vien-foulkes, 18. “I love the club, but there’s way too much testosterone in here.”

Dennis Kao, a 21-year-old business administration student, has other plans for the club. Apparently he wants to help bring other games in to help it grow.

“It’s about 85 per cent Street Fighter right now,” said Kao. “I’m trying to get more people in here to play League of Legends, so I started a Facebook group promoting that. I still love the atmosphere, though. You know, everyone’s mashing their buttons and stuff.”

The Algonquin competitive gaming club Facebook page currently sits at 180 members. Competitive gaming, commonly called e-sports, has been around since people could play the games themselves but has only recently started to get more recognition on a global scale. The season three League of Legends world championships had 20 million unique viewers when the Korean team SK Telecom T1 defeated the Chinese team Royal Gaming Club this summer for a grand prize of $1 million.

Jim Woolley, a graduate of Algonquin, still returns each week to help the club grow.

“It brings both hardcore gamers and casual gamers,” said Woolley. “There’s nothing bringing gamers together in Ottawa, but since I have been overseeing the club, I have seen at least 20 people come out each week at the bare minimum.”

Fabrizio Guido, a 22-year-old computer programming student, just comes for a relaxing night. Still new to the club, Guido’s biggest hope is that he can make new friends.

“It’s a great environment if you just want to have fun,” said Guido. “I’ve already met a lot of new people in my first night here, and it’s the perfect time to just relax and play games.”