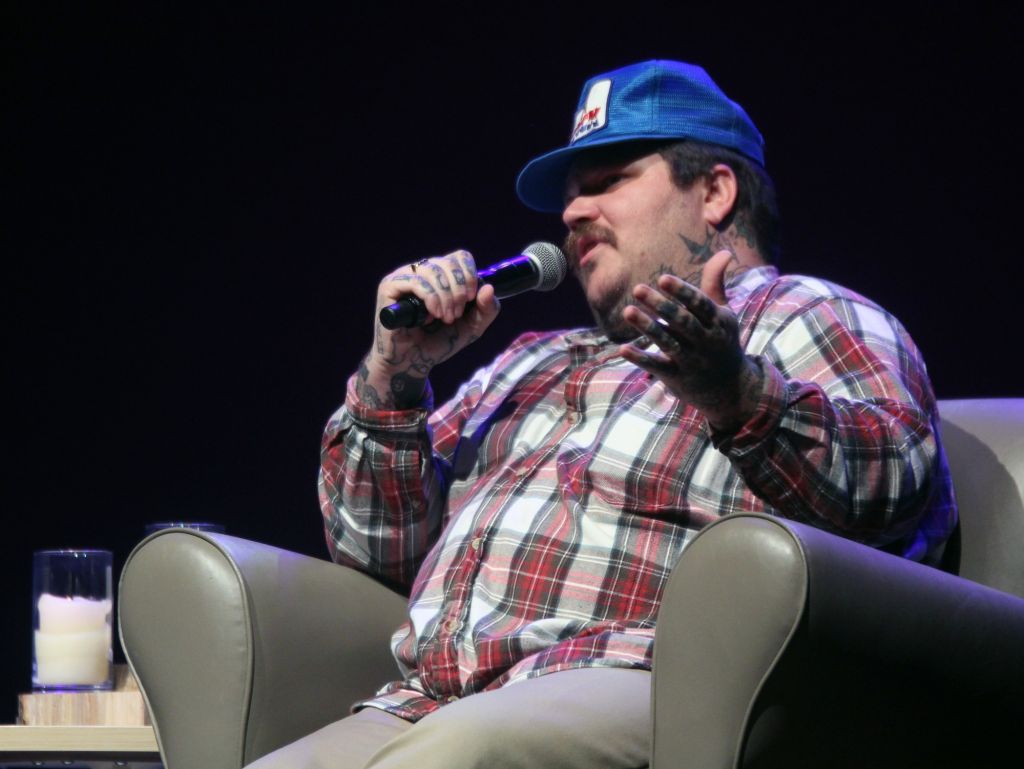 Matheson was at his hilarious best.

Celebrity chef Matty Matheson, along with his long-time friend and Alexisonfire vocalist Wade MacNeil, showed why he is one of the most likeable, noticeable and down-right funniest personalities in Canada.

Matheson gave his faithful fans, some of whom came all the way from his hometown of Fort Erie, Ontario, a hilariously unscripted, unfiltered and unabashed take on his roller coaster-like journey through life Sept. 14 in the Student Commons Theatre.

Known for his work with Vice on the Munchies channel and his contributions to Toronto’s food scene, people were curious to know if others were as much into Matheson as they were. Murmurs of, “Do you watch his shows?” or “How did you find out about him?” and “Yeah man, I know, he’s so hilarious” could be heard in the lobby before the show.

By show time, the place was packed and folks were eager for it to finally begin.

While punk music blared through the speakers, MacNeil confidently walked on stage, dressed in all black with jeans and a Metallica t-shirt and made his presence felt right away. Immediately, he grabbed a microphone and shouted: “How are you motherf–kers doing tonight?” The crowd responded with a deafening roar, to the punk-rock-star’s visible delight.

After MacNeil’s short introduction speech, the music then switched to DMX’s “X Gon’ Give it to Ya” , giving the audience a clear signal that Matheson was finally making his way on stage.

With hardcore Hip Hop playing and rabid fans howling at the top of their lungs, the tattoo-clad Matheson, wearing a red and white flannel shirt, rolled up khakis and a blue snapback ballcap, walked on stage seemingly in slow motion, almost as if he was trying to milk every second of his entrance.

Throughout the show, the Canadian chef and Youtube sensation gave fans total access to who he is and the kind of stuff he’s been through. It was structured in a loose, profanity-friendly, conversational manner. Matheson and MacNeil sat side-by-side on chairs facing the audience, just chatting about life, like two friends having drinks at a local pub.

MacNeil played the role of host and Matheson was the guest of interest.

The laughs were consistent, genuine and that continued during the Q&A session. Fans felt free to swear as much as they pleased, some even giving Matheson restaurant recommendations in the city, during their brief chance to have some face time with one of their idols.

“It was great to see him talk about his life like that and be so open about it and not really give a f—k,” said Ben Swettzer, a graduate of Algonquin’s television broadcasting program and a former line-cook. He said he finds Matheson to be the perfect mix of the two things that interest him most: cooking and television, and truly looks up to him as a role model.

“To hear both of them talk about all that stuff, the way they did, how they got to where they are today. I feel like it helps me connect to them in a way I never did. It was very inspirational.”

Humour wasn’t the only thing that seemed to resonate with the fans Matheson brought up his life’s most humbling experiences, like stealing money from his mother, his troubles with addiction, singling out the time he got caught snorting cocaine in the bathroom of his first restaurant Odd Fellows shortly before service on opening night. He also talked about how suffering a heart-attack at age 29 really opened his eyes to what might happen if he doesn’t get his life in order right away.

“The way he talks about the industry, the ups and downs he’s been through it was really refreshing,” said Shane Stewart a graduate of Algonquin’s chef training program in last year who’s currently pursuing a career in the trade. “He’s easily one of my biggest inspirations and someone I really look up to.”

Of those who attended, many were aspiring cooks themselves which made a lot of Matheson’s content even more special to hear. All in all, it seemed like most of the fans walked away with the same message.

“Just, you can do what you want in life, follow you dreams, because like he said anything can happen for you man,” said Aiden Ewen a heritage carpentry student, who came all the way from the Perth campus to see Matheson live. “He used to be a f–k up, but that stuff doesn’t matter that much at the end of the day. Just look at where he is now.”

The show finished with a meet and greet where fans got to see Matheson and MacNeil, take pictures and rub-shoulders a little bit, which was an unforgettable experience for many

What’s next for Matheson?

He announced, to the shock of most fans in attendance, that he is leaving his famed Toronto restaurant, Parts N’ Labour, to open a new restaurant — with the idea of truly making it his own. He also announced that he’s launching a new show for Viceland that is presumably going to be named “It’s Supper Time”, which the fans were collectively excited about.

Whatever he does, it seems like he always finds a way to makes people laugh uncontrollably.

“Matty is literally the most hilarious person you’ll ever see in your life, that’s all you need to know,” said Ewen.