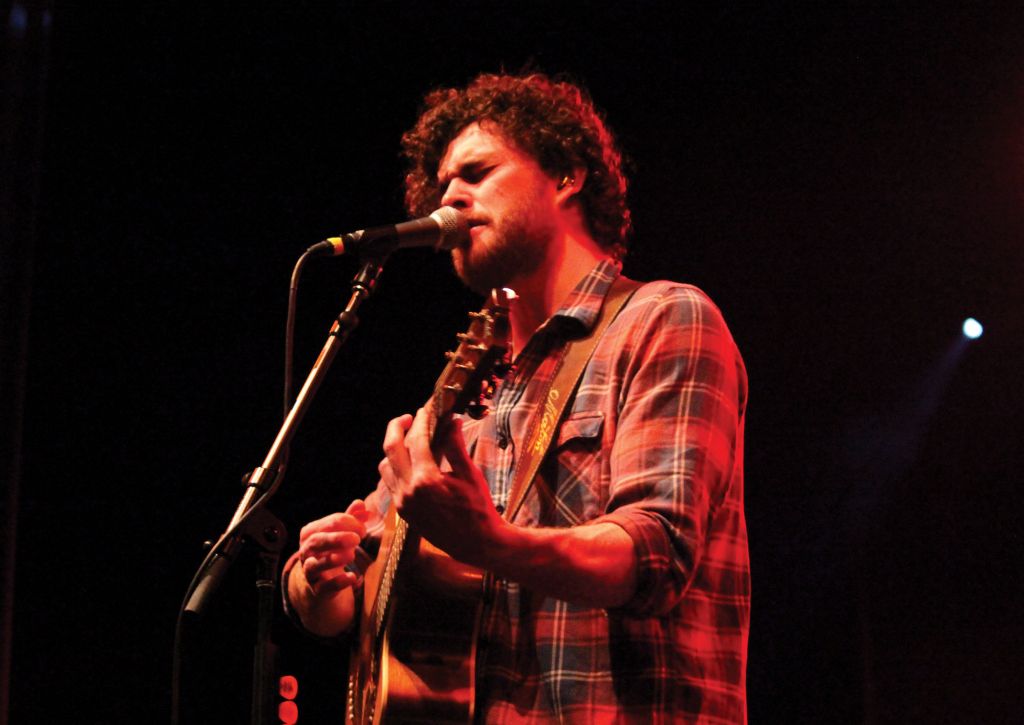 Vance Joy got right to business taking the stage and starting with a favourite from his EP God Loves You When You’re Dancing, Emmylou.

Australian singer, songwriter, and the newest addition to Taylor Swift’s 2015 tour, Vance Joy engaged an eager sold out crowd at the Commons theatre on the evening of Nov. 3.

The show began with a short five-song set from opener Jaymes Young, who hails from Los Angeles, who stayed in tune and kept the crowd entertained despite getting over the worst cold he’s ever had.

Vance Joy got right to business taking the stage and starting with a favourite from his EP God Loves You When You’re Dancing, Emmylou. The crowd was instantly captivated by the Aussie’s warm voice as he continued to sing songs from his debut full-length album Dream Your Life Away, which doubles as the name of his current tour.

He introduced My Kind of Man with a quick story admitting sheepishly that it spawned from a quote he saw on his uncle’s Facebook page. He played it to his parents, and it was his dad who pointed out its familiarity. Turns out it was a quote from a Lynyrd Skynyrd song.

The now ever-familiar song Riptide was the second last song of the night which had the 800 person crowd singing along.

But before Vance Joy set foot on stage, he sat down with a Times reporter and discussed a number of topics ranging from Taylor Swift to what he’s been reading on the road.

On being Taylor Swifts 2015 tour opener

“I’m super excited, I think probably the biggest opportunity,” said Vance Joy. “I’m looking forward to walking into that world, to just be a part of it, and who knows, I don’t know what to expect completely, but I’m excited for the experience and the challenge.”

Although he did not receive any kind of personal phone call from Swift he still felt the love.

“I’m super complimented; I think she’s pretty involved with who she chooses, and she’s awesome,” he continued. “It’s the same way with any artist, they want to know who’s supporting them and they want to choose somebody they like, and in her case she can just go wild.”

On following after Ed Sheeran

“I mean, I think every artist is so different. We just play the way we play, and do what we do, and whatever happens, happens. I mean, we’ve got 60 great shows lined up so we’ll do that, and I’m sure something will happen over that time that will kind of tell me which way we’ll head next.”

“I was in Amsterdam and I was doing some promo, and she (his manager) showed me her phone with the recording but I couldn’t see the footage and I was like ‘this sounds really good, why are you hiding the screen?’ Needless to say he was flattered by it.

“I like hearing my song covered by a really strong female vocalist, and also just stripped down, to the bare essentials, just chords,” said Vance Joy. “I really got that vibe she was enjoying it.” Adding, “It’s so powerful when you see someone close their eyes and really going for it.”

On his songwriting process

“Usually melody first, sometimes you gravitate to the words, just by singing a melody, and I just start saying words with the melody. Sometimes I’ve just had words that I just thought ‘that needs to be in a song.’”

“I got the melody for the chorus, like three days after writing those first two lines (I was scared of the dentist and the dark, I was scared of pretty girls and starting conversations) and I always found when lyrics flow easily it’s always a good sign, it doesn’t always happen like that and sometimes you have to work for it.” Adding, “It’s a very strange, bizarre chemistry song writing. There’s a good quote from Leonard Cohen that says, ‘If I knew how to get to the place where the good songs are I’d visit there every day.’” However, Joy admits he does not know where that place is exactly.

On his recent meeting of Daniel Radcliffe

“Ya, it was cool, I’m a fan of his as well, he’s such a good actor and also a great guy. Really nice just so warm, came into the room and shook everyone’s hand. Super comfortable in his skin, humble, we were all just excited to see him. I was so glad I have a photo just because like these things kind of happen, and it happened very naturally, I got the rad photo.”

“I really like Ryan Adam’s song writing,” said Joy adding, “I was on Jools Holland in England, and he was one of the acts on the show.”

On meeting his idols

“And I feel like you know their music, you know their songs, you have a kind of appreciation for them, it’s kind of all I guess formulated in your head, it’s hard to be completely straight with them, you come with this whole baggage of ‘oh my God it’s you!’ and it’s a shame that it’s there and I’m learning how to cope with that.”

On expectations of himself

“I feel like that when people meet me…people might have a preconceived notion of what I’m like, and might think that you’re better looking on the CD or he’s taller than I was hoping he’d be, or he’s more flawed, or whatever it is. So I think sometimes that’s just what happens, is when people have an idea of what you’re like, and maybe it’s spot on, but more likely it’s like not exactly.”

On living life on the road

“That’s a good question, this is like I came to talk about this kind of stuff because our day-in and day-out is the unglamorous side of things, like ‘where am I sleeping tonight? Is my bed comfortable? What am I eating for breakfast or lunch?’”

On his tour ‘must haves’

On what he’s reading now

I’m reading this guy David Foster Wallace, he’s a really funny writer, and he writes this story about Harper’s Magazine got him to go on a trip on this luxury cruiser, to talk about his experience, but it’s very funny. He goes on this luxury cruiser for about six days and it’s just hilarious.

On the strangest place he’s heard his music

“I often get people telling me where they’ve heard the song, someone told me they heard a busker in like the Rhumbas, in Barcelona, on the big strip. There was an old guy playing Riptide, which is cool. So that was amazing hearing that. I got that second hand.”

On hearing Riptide on the radio for the first time

“Ya, I was at home in bed and I got a call, my friend was like ‘I just got in the car, riptide is on the radio,’ this is in like May 2012, and I just jumped out of bed sprinting down the stairs; I kind of made a bit of noise, and I as I put the radio on I heard ‘That was Riptide by Vance Joy.’ I heard like one or two seconds.

However brief the moment seemed to be he was not at all phased or disappointed. “You only get that once, you know.”

On his radio success

“I thought for a while it was impossible to get a song on radio because it just seemed like that was a world you couldn’t inhabit, so, that was, the goal initially was just to record songs, and then it was maybe we could get plays on the radio, that would be like a dream come true, like if we’re going to set the bar really high, maybe a couple of plays on radio, if we’re lucky, that’s like gold, like every box ticked. You’re expectations just change dramatically. But at that time it was the biggest thing.”