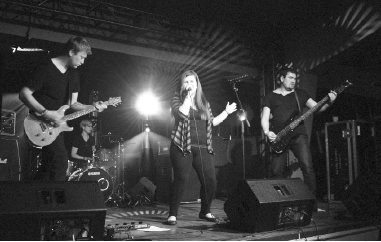 The bar’s atmosphere was tense the moment before the winner was announced. Five talented acts performed but only one would advance: an old-school rock and roll revival called The Ecstatic.

In what was said by a judge to be a close decision, Crazy Bones, an alternative rock band with punk-influenced attitude, was judged second.

These were the only two bands singled out by the judges at the Battle of the Bands at the Observatory on March 10.

The Ecstatic had a female singer with an immensely powerful rock and roll voice and wasn’t shy about shaking her hips and losing herself in the music. The bassist moved around so much it was difficult to keep track. And alongside them, all the musicians laid down tasty riffs that harken to ‘70s rock and roll.

“When I play music, nothing else matters,” said Joel Dal, the bassist in an interview after the show. “Everything else fades away…. You forget about your rent, your job and all parts of life.”

Jenna Taggart, the band’s vocalist, said after 16 or 17 years she didn’t know anything else other than music.

Explaining why throwback sounds like theirs are gaining speed, Dal said, “Music recycles itself after a while.”

Crazy Bones approaches their music from another angle. Their energy on stage was the most apparent thing about the performance. The guitarist was completely absorbed in motion and all three musicians  appeared to be having great fun playing their punk-infused formula of alternative rock. In fact, the members of Crazy Bones are all about the Old Style Pilsner beer.

Explaining their energy, Pete Turik, the guitarist, said, “We can’t just stand there. What are we, Creed?”

The night wasn’t supposed to kick off until 8 p.m. but at 7:15 p.m. Mary Street Bridge, the first band played a cover of Neil Young’s Keep On Rocking in the Free World with a keyboard solo. A female vocalist was pulling the singing off without difficulty.

When they played again at 8:30 p.m. to a larger crowd, the front of the stage was clear of people. The musicians, were quite engrossed in their instruments and the vocalist would sway to the music. The sound ranged from funky grooves to hard rock with strong female vocals suited for hard rock.

Crossing Jane also performed. They played grunge in the vein of Soundgarden but with a modernized edge. The playing was tight and the sound was very polished and professional.

There was also Bearings, a ‘90s pop-punk throwback. Before they started, several women flocked to the front and men soon followed. They were constantly moving around about the stage and occasionally would just jump up and down as was popular in the ‘90s.

To get a sense of their sound, think of Gob, All-American Rejects and Sum 41.

When the judges’ decision was announced, The Ecstatic were rewarded for years of commitment to music. Second place Crazy Bones received recognition. Spirits were high for both bands having got what they hoped for.