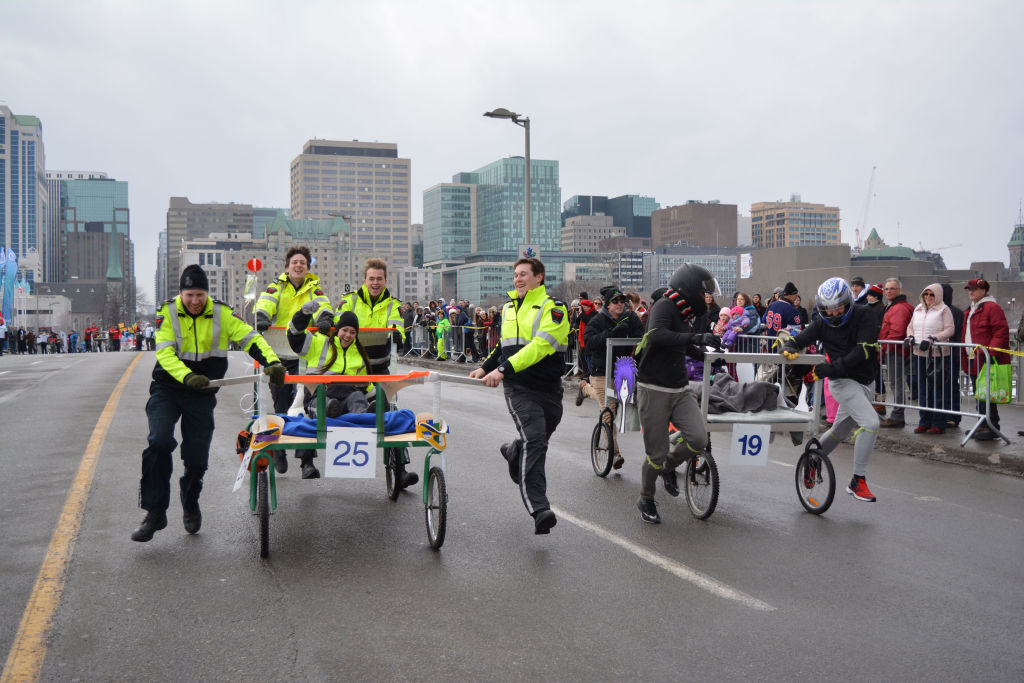 The paramedic team's bed was decked out to look like a hospital bed. They placed in third for the race portion of the event, and were and early crowd favourite when it came to spirit due to their fake CPR routine that was done on Nikita Yastrebov in the bed.

The annual Accora Village Bed Race for Kiwanis was held on Saturday Feb. 6 on Laurier Street Bridge. The event normally takes place on Dow’s Lake, but due to the unusually mild weather this year that was not a possibility. This is not the first year that the Bed Race has been held on the bridge, but it has been a number of years since this has happened.

The bed race is an event meant to raise donations for the Kiwanis club of Ottawa. The Kiwanis club’s goal is to address the needs of the community. The bed race raised about $40,000 this year, with the biggest fundraisers being GGFLCPA, Queensway Carleton Hospital Foundation and the International Union of Elevator Constructors.

A number of students from various Algonquin programs took part in the bed race, including students from the paramedic, civil engineering, co-op, international students, construction and welding and fabrication techniques programs.

Algonquin had three beds that were involved in racing, each with a team of five people; one person sitting on the bed and one person on each pole of the bed. There was meant to be a fourth bed with students from the International students program, but the students that signed up to race cancelled the day before according to Michelle Cameron, the Manager for International Student Integration.

The event took place in three segments, decoration, parade, and races. The first bed from Algonquin was all paramedic students. They had a bed fashioned to represent a hospital bed.

During the parade, the four team members pushing the bed performed a fake CPR routine on the person in the bed, which made them a crowd favourite. The paramedic team was the only team to make it to the final round of the race segment, placing in third overall.

The welding and fabrication techniques program constructed eight beds that were used for the Bed Race. The program has been building and donating beds for the event since 2013. It took approximately four in-class weeks in order to build the eight beds.

“We start by ordering materials, then we draw up a simple plan. After that we weld it together and the cross member is bolted on,” said Jeffrey Ross, the coordinator and professor of the welding and fabrication techniques program. All of the techniques used to build the bed frames are techniques that are learned in the classroom, such as Shielded Metal Arc Welding (SMAW) and Gas Metal Arc Welding (GMAW).

“It was lots of fun, and as long as people have fun that’s all that matters,” said Ross.