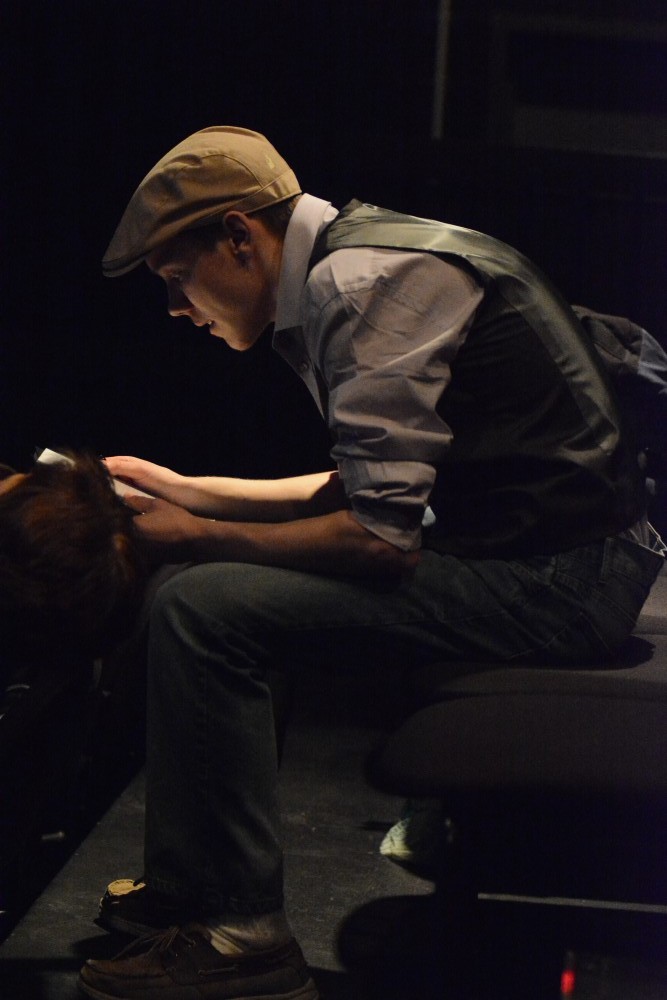 Trevor Osbourne reviews his notes before the play Tough! put on by theatre arts students. This was the 20 year-old's directional debut.

Cast and crew members from a play put on by Algonquin theatre students agreed that it takes much more than just acting in order to produce a successful play.

The play, Tough!, written by George F. Walker had a three-day run in early march.

Sasha Laing, the assistant stage manager, worked backstage for this performance to ensure it ran efficiently.

“It’s nerve-racking because there’s a lot to do before the show,” said Laing.  “If things don’t run smoothly the show could fall apart.”

This small cast of three had an entire army of students working behind them doing lights, sound, costumes and set design.

The co-director, Trevor Osbourne, made his directorial debut with this play and says he has really enjoyed seeing it all come together from a different point of view.

“Its really fun to direct,” said Osbourne.  “It’s really interesting to see how much dynamics go into a show,”

He isn’t the only one who enjoys seeing it come together though, as director and professor Mary Ellis also feels this way.

“It’s one of the best feelings in the world to see how far they have all come,” said Ellis.

Students will put on a total of three plays during this semester in which they will either act or work backstage, giving them the opportunity to work various jobs with different people.

“I had a really good experience,” said Catherine Valcy, 19.  “I got to see these people in a whole other light.”

Laing also said that she likes being able to work on and off stage.

Although a lot of the students’ favourite part of the program is the hands-on aspect, Bianca Gabriel, a part-time student of the program, enjoys the sense of community.

“My favourite part of this program would be getting to know a lot of people,” said Gabriel.  “We’ve bonded and really become like a family.”