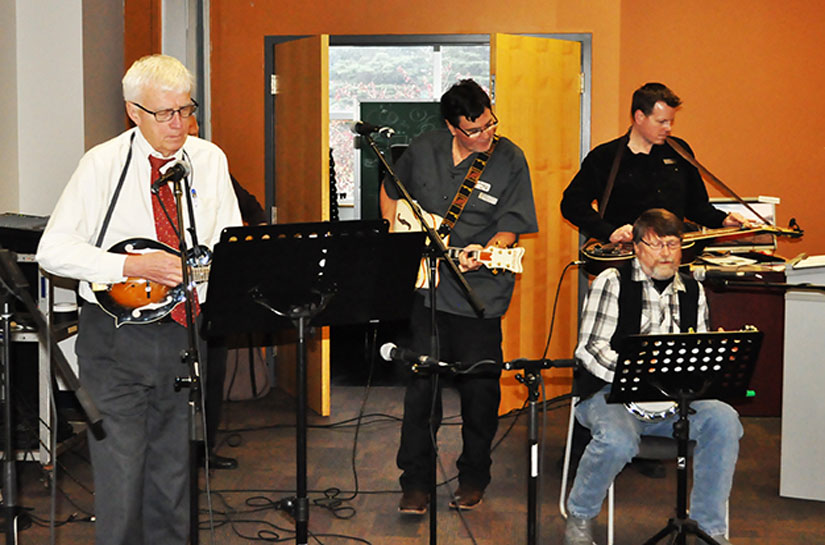 The eighth annual faculty and staff art show was held on Nov. 13 at Algonquin.

The show featured art from various members of the college staff, with live music and refreshments.

“It’s good for students to see that their faculty knows what they’re speaking about,” said Nancy Boughner, 54. Boughner is the assistant to the dean of the media and design faculty and organized this year’s show and has been helping to organize since the third annual show.

The most exciting aspect for Boughner is being able to see the artistic vision of her co-workers.

“Just getting to see the talent, you know? You see these faculty all the time – just the work that they can do, it’s amazing,” she said.

The house band changes each year, though it maintains a core of two or three consistent members year to year, including Media and Design Dean Russ Mills. Some of the members of the house band had also contributed visual art pieces to the show.

David Bromley, the coordinator and a professor of the graphic design course, had numerous pieces featured in the show.

“It’s based on Mexican folk art,” Bromley said, describing his art style. Each piece has a wooden board for a base and consists of various pieces of coloured yarn arranged onto the board into images, held into place by glue.

“I’ve been doing Canadian wildlife themes,” he said. “It’s time consuming, but it’s very relaxing. Very therapeutic to do.” Bromley was influenced by a trip to a Mexican art gallery where he first witnessed the style.

On top of graphic design and visual arts, which he does professionally, Bromley also plays the banjo ukulele. He performed at the show with the house band.

His artistic lifestyle spans back to his childhood.

“I always did art as a kid, but that’s what they all say,” he said with a laugh. Upon seeing an advertisement promising $20,000 a year, he decided that graphic design was his calling.