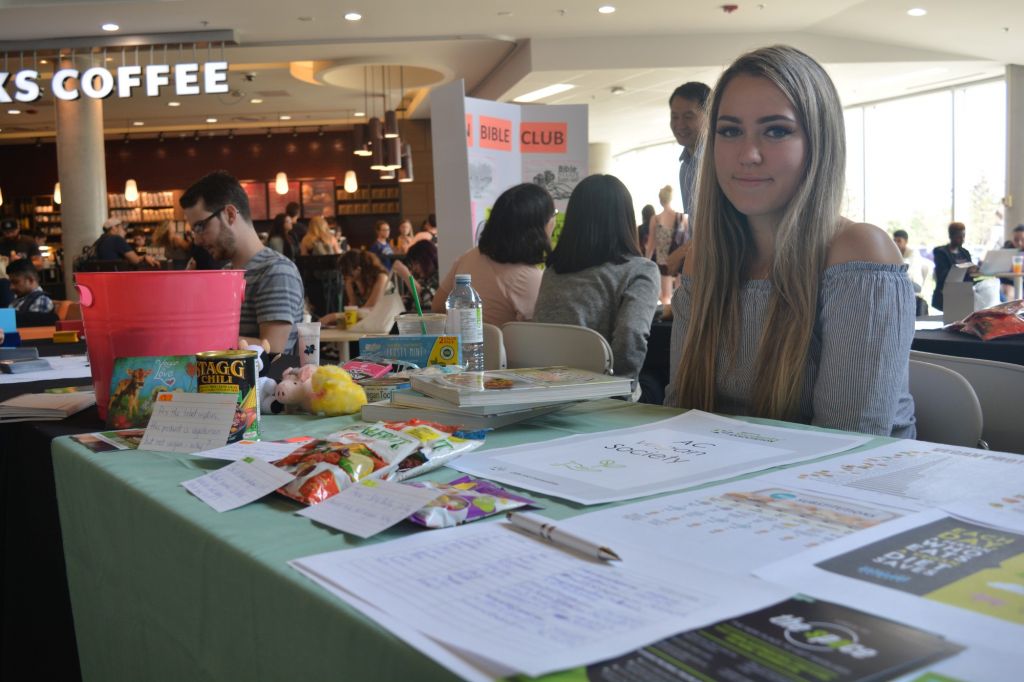 Melissa Barber wants to introduce students to the lifestyle of healthy eating with the Vegan Club. She hopes to generate for interest among students with scheduled meetings and potlucks.

Students were able to walk around and have a meet-and-greet with all of the available clubs Algonquin has to offer in one single event on Sept. 26 in the Student Commons.

Clubsfest is an annual event that allows students to join a club of their interest and be part of the meetings and activities. A total of 18 clubs were in attendance for this year’s event.

Some clubs are offered as a tutoring session for students looking to improve their abilities, including the Programming Club. Joel Janzen, coordinator of the Programming Club, puts together a challenge for members on the same level as their coding ability and let’s them try to solve it.

“Members are given a challenge that is on their level,” said Janzen. “The challenge is meant to enhance their programming skills and get better.”

Other clubs tried to introduce a new lifestyle to students that they might have been curious about before. Melissa Barber of the Vegan Club is trying to do just that by introducing a healthier lifestyle of plant-based foods and offering healthy snacks at her booth.

“We have gathered 26 signatures since the event started,” said Barber. “We are still generating interest because we are a newer club.”

Barber says that her club accepts anybody who is interesting in experiencing a healthier-eating lifestyle. She hopes to have more meetings and potlucks in the future to garner more interest among the students.

Silviu Riley used Clubsfest to promote his cause “Fight for $15 and Fairness”, a movement to fight for $15 minimum wage jobs and better working conditions.

“The event is going very well,” said Riley. “Students have been very supportive and we have gotten a lot of signatures.”

Algonquin even offers students the chance to learn ancient martial arts at the Historical European Martial Arts Club with Jason Smithson. Smithson revealed that the idea behind this club actually started as a study group for a lesser known course.

“Most people don’t know that Algonquin has a Historical Martial Arts course,” said Smithson. “This actually started as a study group for those students who wanted to enhance their abilities.”

The club offers to teach newcomers materials from the 1500s and up and techniques that include different weapons including the sabre, rapier and even the spear. Smithson acts as a teacher for certain lessons as he has been studying the materials for the past three years.

“This is a free space for people to come and work on their craft,” said Smithson. “We want people with passion.”

Students are also encouraged to start their own club that Algonquin will fund as long as it follows the college’s values of learning and respect. Students interested in creating their own club can fill out an application here.