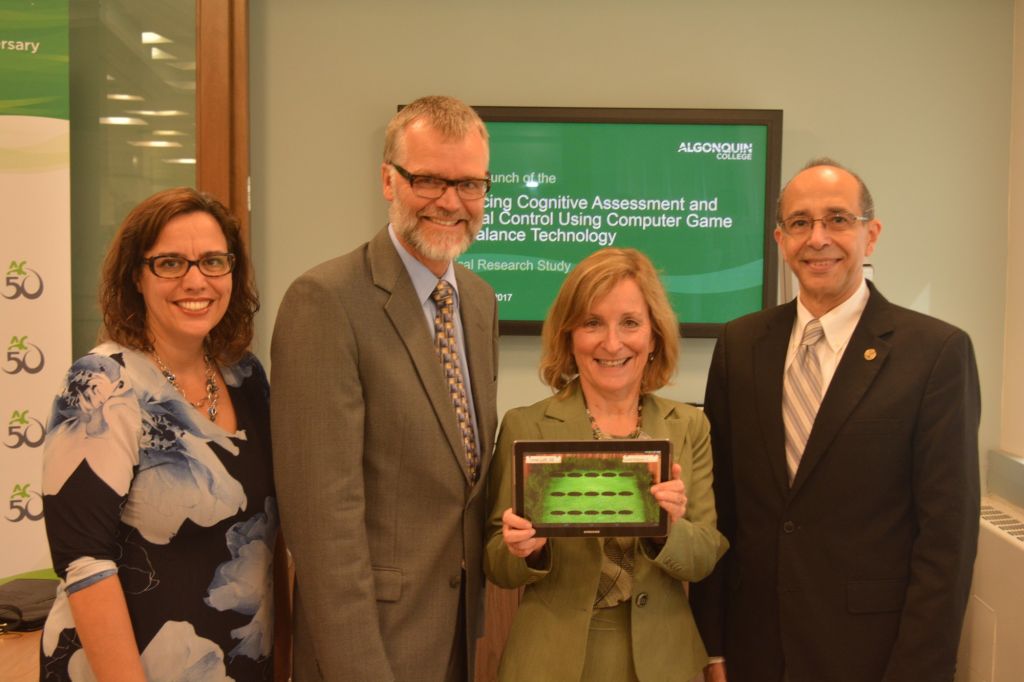 Could the game of whack-a-mole play a role in unlocking the mysteries behind dementia?

The students in the Occupational Physiotherapy program and a researcher are about to find out.

Over the course of the next year, lead researcher Dr. Frank Knoefel from the Bruyère Research Institute will be measuring the brain cognition and balance in senior citizens with dementia with a simple study.

The study includes having the participants play a tablet game called Whack-A-Mole, to study whether there is a correlation between the brain cognition and balance of seniors with dementia.

The idea of the game is to tap on a mole as they come out of a hole as fast as possible, while avoiding tapping bunnies. The faster the player hits a mole, the faster the game becomes.

“The bunnies are meant as a distraction,” said Knoefel, who attended a press conference Sept. 19 at the Garbarino Girard Centre for Innovation in Seniors Care, located in building A, to announce its first clinical research study.

“When someone hits a mole, their brain is creating the inhibition that they’re supposed to hit the mole as fast as possible.”

After participants play a session of Whack-A-Mole, they are then led to a piece of equipment called the Biodex Balance System that measures their balance while completing a simple brain task. The machines are equipped with sensors on the bottom the participant’s feet to detect if their improvement has improved or not.

“It’s easy to stand completely still if you’re concentrating on doing so,” said Knoefel. “But if I asked you to stand still and then recite the months backwards, your brain would be concentrating on that task and you could lose your concentration of keeping straight.”

Dr. Amanda Baker, a research assistant, added that the hypothesis of the study is that the higher an individual reaches on the game, the better their balance will be.

“We look at their scores and performances,” said Baker. “The higher the score, the higher chance they have improving their balance we hope.”

Knoefel’s study got picked up by Algonquin after starting his research in West-Ottawa, Kanata. Algonquin offered to provide the environment and the equipment.

Tim Tosh, coordinator of the Occupational Physiotherapist program, says that the students will assist in data collection as they work within the apartment to observe the subjects.

Among those students are Jessica Van Beek.

“We help monitor the data and make sure no one gets injured during the process,” said Van Beek. “These people don’t always have the greatest balance so I stand behind them on the [Biodex Balance System] and make sure they don’t fall.”

Knoefel hopes to improve both the brain cognition and balance of the participants of his 12-month long study. “We just want to be sure that people can tolerate [the study],” said Knoefel.